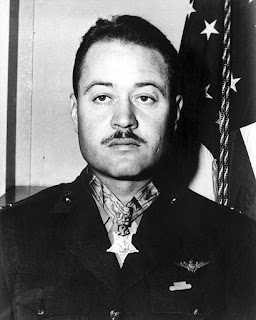 "For extraordinary heroism above and beyond the call of duty as Commanding Officer of Marine Fighting Squadron 214 in action against enemy Japanese forces in Central Solomons Area from September 12, 1943 to January 3, 1944.  Consistently outnumbered throughout successive hazardous flights over heavily defended hostile territory, Major Boyington struck at the enemy with daring and courageous persistence, leading his squadron into combat with devastating results to Japanese shipping, shore installations and aerial forces.  Resolute in his efforts to inflict crippling damage on the enemy, Major Boyington led a formation of twenty-four fighters over Kahili on October 17, and, persistently circling the airdrome where sixty hostile aircraft were grounded, boldly challenged the Japanese to send up planes.  Under his brilliant command, our fighters shot down twenty enemy craft in the ensuing action without the loss of a single ship.  A superb airman and determined fighter against overwhelming odds, Major Boyington personally destroyed 26 of the many Japanese planes shot down by his squadron and by his forceful leadership developed the combat readiness in his command which was a distinctive factor in the Allied aerial achievements in this vitally strategic area."

Thank you for your service and may you be at peace,
Brian
Posted by Weird WWII at 4:50 AM