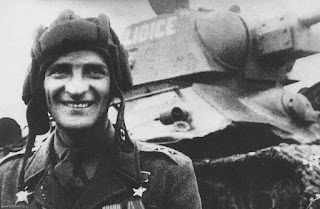 After the occupation of his homeland by the Nazis in 1939, Josef joined the Czech and Slovak Legion exiled in Poland so that he could continue his fight against the Germans.  During the invasion of Poland by the Germans, he would find himself fighting alongside the Poles against the Nazis in and around Tarnopol.  When the Russians invaded Poland under agreement with the Germans, Buršík was captured by Soviet forces and would find himself a POW of the Red Army.  In 1942 Buršík joined the Soviet organized First Czechoslovak Independent Field Battalion and would fight in the Battle of Sokolovo and in the Battle of Kiev.  It is in this battle that he was awarded the Gold Medal of the Hero of the Soviet Union for being one of the first units to reach the center of the city.  After the war he would command a tank brigade based in Ostrava until he left the Czech army.  He was then arrested for anti-communist ideals and was imprisoned and stripped of all his awards except the Gold Medal.  He was later able to escape to the West where he would continue his fight against the Soviets.  He would renounce his Golden Medal in 1968 wen the Soviets invaded Czechoslovakia.  In the latter part of his life, his homeland would acknowledged him as a hero of the nation and all his awards and ranks were restored.  He was also awarded the Order of the White Lion and the Milan Rastislav Stefanik Order before his death in 2002.

A man who would do anything to fight against the enemies of his nation,
Brian
Posted by Weird WWII at 11:12 AM