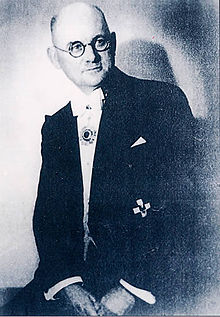 Rabe was a German businessman who found himself in Nanking during the Japanese assault on the city.  Using his Nazi Party credentials, Rabe along with several other Westerners established the Nanking Safety Zone which gave sanctuary to any Chinese civilians within it.  Due to the Anti-Comintern Pact, the Japanese honored the safe zone for the most part and it's creation is credited with saving the lives of over 200,000 to 250,000 civilian lives.  Upon his arrival back to Germany in 1938, he spoke of the horrendous actions of the Japanese and showed pics and films of their blood thirsty slaughter of the Chinese people.  He even wrote to Hitler and asked him to speak to his Asian counterparts to restrain their soldiers.  His letter was returned with his arrest and interrogation by the Gestapo and his censure of his experiences in China. Luckily due to his position with Siemens, he was spared anymore scrutiny as long as he keep quite.  After the war he would be interrogated by the Soviet NKVD and would find himself blacklisted for his membership within the Nazi Party.  Him and his family would live in squalor in East Germany until his story made it back to the people of China.  Horrified by their benefactor's situation, the people of Nanking donated an equivalent of $20K to him and his family along with food and clothing for his kind deeds in China.  The Rabe family would get a yearly stipends and care package from the grateful populace of Nanking up until the Communist takeover of the country.  He would die young and in relative obscurity in the West but he was given a great honor with his headstone being interned at the Nanjing Massacre Memorial Hall.

A man who saved so many and yet was affiliated with some that destroyed so many others.  War is truly Hell.
Brian 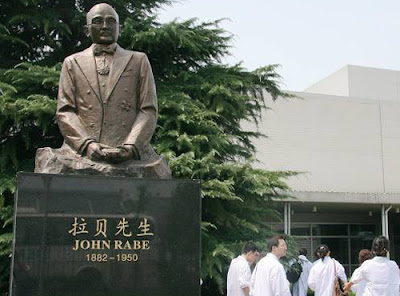