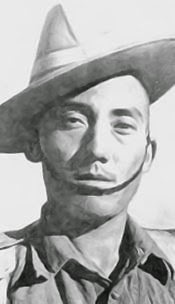 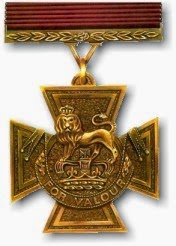 
In Burma in late June 1944, Agansing was tasked with taking two vital positions now held by an enemy machine gun and 37mm gun.  Upon reaching the location Rai's force became pinned down by withering enemy fire and knowing that any delay will stall or even blunt their assault,  Rai raised and urged his section on forward.  Firing as he charged the enemy position, Rai neutralized the enemy machine gun crew with the help of his men.  With the machine gun beaten, the 37mm gun open up on the position and Rai once again raised up and charged the enemy position.  With his men following, Rai killed most of the crew and silenced the murderous weapon's fire.  Then from a hidden position, the men form the 5th Royal Gurkha Rifles came under intense fire from enemy fire and grenades.  With covering fire from his men, Rai single-highhandedly charged the position and with a single grenade and a burst form his Thompson SMG, he silenced the enemy position.  Witnessing such bravery and skill by the enemy, the remaining Japanese troops retreated their position and the vital position was securely in Allied hands.

For his bravery, Agansing Rai was awarded the Victoria Cross on January 23, 1945.
Thank you for your service and may you be at peace,