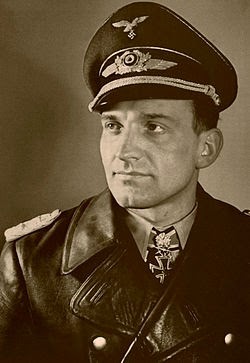 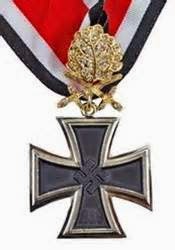 Hans-Ulrich Rudel was a bomber pilot who kicked the shit outta just about anyone he was up against.  He was awarded the only Knight's Cross of the Iron Cross w/Golden Oak Leaves, Swords and Diamonds on January 1, 1945.  He flew 2,530 sorties and was credited with destroying 800 vehicles, 519 tanks, 150 artillery pieces, 70 landing craft, 9 aircraft, 4 armored trains, several bridges, a destroyer, 2 cruisers, and the Russian battleship Marat.  Rudel was shot down, or forced to land, 32 times but never by enemy aircraft but rather enemy anti-aircraft fire.  The man even lost his lower leg and continued to fly with modified aircraft controls!  Rudel spent most of his combat career flying the Stuka dive-bomber and later the ground attack version of the FW 190 in the East against the Russians until the war's conclusion.  To top off a stellar combat career, Rudel lead a flight of aircraft to a captured airfield and crashed landed on the runway as to make his aircraft and the airfield unusable and then surrendered to the American forces occupying it.  Rudel would move to Argentina and then back to West Germany after the war and become a successful business man and politician.

Although on the wrong side of the battlefield and a stanch Nazi, Rudel was a true force to be reckoned with and a true enemy elite in every way!
Brian
Posted by Weird WWII at 1:31 PM