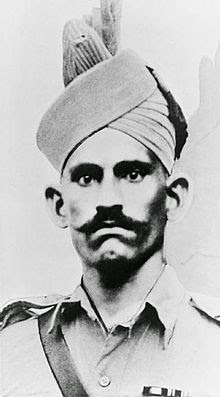 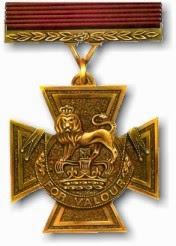 On April 6, 1944 near Imphal, Burma, Jemadar Abdul Hafiz of the 5th Indian Division was ordered to attack an entrenched enemy position that could only be approached via an open steep slope and then ragged cliff.  Hafiz lead the charge up to the enemy position under intense machine gun fire and grenade attack.  Upon reaching the crest of the position, Hafiz sustained a light wound to his leg but without hesitation he reached out and man-handled an enemy machine gun skyward preventing its fire from hitting his men as another man killed its crew.  He then retrieved a Bren from a fallen comrade and proceeded to advance against the enemy while wounded and under heavy enemy machine gun fire.  His bravery rallied his men and inspired them to an all out charge against the enemy position.  During his advance, Hafiz took a mortal wound to the chest and died while manning his Bren against the retreating Japanese troops.  For his bravery and leadership, Abdul Hafiz was awarded the Victoria Cross in July, 1944.

Thank you for your service and may you be at peace,
Brian
Posted by Weird WWII at 6:56 AM