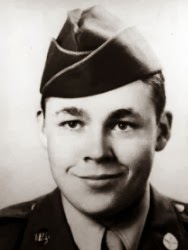 "He displayed conspicuous gallantry and intrepidity above and beyond the call of duty when his company was pinned down by heavy artillery, mortar, and small arms fire, near Castel d'Aiano, Italy. Volunteering to act as a scout, armed with only a rifle, he charged headlong into withering fire, killing 2 Germans and wounding 3 in order to capture a machine gun. Carrying this enemy weapon across an open field through heavy fire, he neutralized 2 more machine gun nests; he then circled behind 4 other Germans, killing them with a burst as they were firing on his company. Spotting another dangerous enemy position to this right, he knelt with the machine gun in his arms and exchanged fire with the Germans until he had killed 2 and wounded 3. The enemy now poured increased mortar and artillery fire on the company's newly won position. Pfc. Magrath fearlessly volunteered again to brave the shelling in order to collect a report of casualties. Heroically carrying out this task, he made the supreme sacrifice--a climax to the valor and courage that are in keeping with highest traditions of the military service."

Thank you for your service and may you be at peace,
Brian
Posted by Weird WWII at 12:00 PM