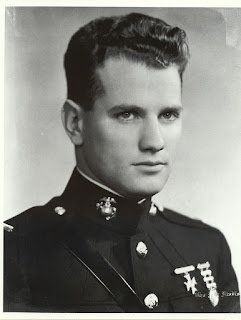 "For distinguished conduct in the line of his profession, extraordinary courage and disregard of his own condition during the bombardment of Sand Island, Midway Islands, by Japanese forces on December 7, 1941.   Lieutenant Cannon, Battery Commander of Battery "H", Sixth Defense Battalion, Fleet Marine Force, U. S. Marine Corps, was at his Command Post when he was mortally wounded by enemy shell fire.  He refused to be evacuated from his post until after his men, who had been wounded by the same shell were evacuated and directed the reorganization of his Command Post until forcibly removed and as a result of his utter disregard of his own condition he died from loss of blood."

From 1LT Cannon's Medal of Honor citation, awarded in 1942.

Thank you for your service and may you be at peace,
Brian
Posted by Weird WWII at 8:02 AM