"I Married A Wargamer" 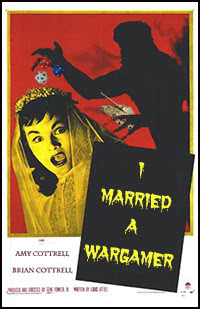 I was going through some old files and found an old blog entry of my wife's on what it was like being the wife of a wargamer.  Take a gander and see what she thought.

"Before I met my husband, I had never heard of historical wargaming.  I mean, I had been in and out of comic shops my entire life and had seen different miniatures on the wall.  Not interested, I assumed that it was all “Dungeons & Dragons stuff”. (My husband hates when I say that!)

I had certainly never ventured into the back of a comic book store to witness any kind of games being played.  It was brave enough to be in there at all.  A lone girl in a comic shop is akin to going into a seedy convenient store in the middle of the night.  Make no eye contact, get what you need, and get the hell out before you’re surrounded.

“You mean like RISK?” I asked him, as he tried to explain it on our first date.  “Hmm, kind of,” he said, “but no. It’s much more complicated. You see, we have very detailed miniature…”
“Oh! Like Dungeons & Dragons!”
(groan) “No.”

I was later led to his workbench where he showed me dozens of tiny trees, tiny cars, tiny cottages and tiny people.  It looked like he was building one of those Christmas villages you see in a window at Hallmark.  You know, except for all the Nazi propaganda posters and battle damage.  His models impressed me, as I would never have the patience for something that time consuming.  I also found his knowledge of history to be 10 times my own.  All in all, it seemed to be a harmless little hobby of his. So he still plays with his G.I. Joes, I thought.  That’s cute.

Over three years later, “cute” would not be the word I’d use to describe it.  Obsessive, maybe. (There are random sheets of paper all over the house with lists of weapons, vehicles, soldiers… mostly in German or military jargon).
I can definitely describe it as expensive. (30 bucks for a tiny little windmill?!) And at times, just plain weird.  (“Honey, I can see the brush strokes on your fingernail polish from across the room.  You want me to show you how to do it?”)
It’s not all bad, though.  For instance, I now know the difference between a Panzerfaust 30, 60, 100, 150 and 250.  You know, in case it ever comes up at cocktail parties.

Since that was written, she has partaken in countless games for her own enjoyment as well as just to please me.  Its pretty cool to have a wife who will embrace your hobby and support you in it too.  Now its off to watch American Horror Story or some other supernatural erotica with her, sometimes you just gotta take one for the team because she would do the same for me.

Thanks baby, I love ya.
Brian 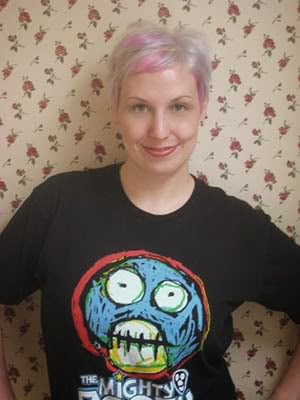 The misses after she thoroughly kicked my ass on the tabletop (A common feat).
Posted by Weird WWII at 9:34 AM