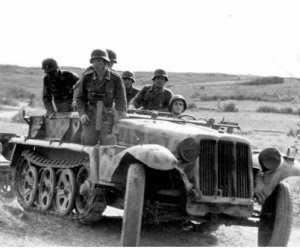 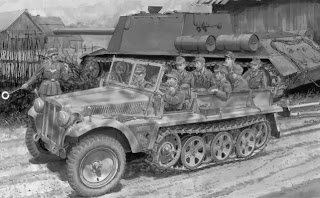 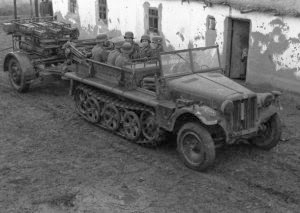 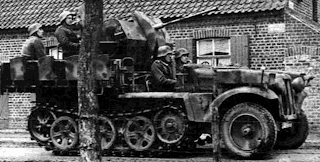 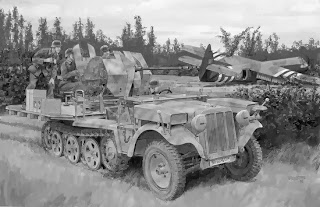 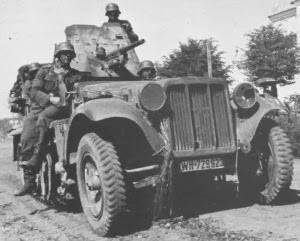 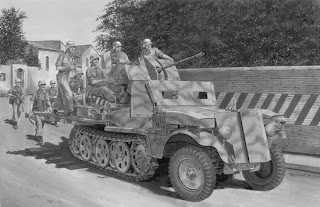 
Notes:  The SdKfz 10 was designed as a prime mover for artillery and flak guns but would later be the chassis of the successful SdKfz 250 armored half-track series.  Be sure to pick up the best in WWII wargaming here so you know what all this shit below means.
Date Introduced:  SdKfz 10 (Early '38),  10/1 (Early '40), 10/2 (Mid '38), 10/3 (Mid '38), 10/4 (Late '39), 10/5 (Early '42), 37mm model (Mid '40), 50mm model (Early '41) & "Drilling" model (Early '44)
Users:  Germany & Romania (Prime Movers Only)
Vehicle Chart:  We use the SdKfz 251 chart within the main rulebook and modify where needed.
Crew:  SdKfz 10 & 10/1 have crews of 1 (driver), 10/2 & 10/3 have crews of 2 (commander & driver), 10/4, 10/5 & "Drilling" have crews of 7 (commander, gunner, driver & 4 loaders) & the 37mm and 50mm models have crews of 4 (commander, gunner, loader & driver)
Passengers: The SdKfz 10 & 10/1 can have up to 7 passengers.
Cargo:  All models are capable of towing small cargo trailers or light guns like the Flak 30 or PaK 36.  All Ausf B models are designed to tow heavier loads like the PaK 40 or sIG 33 and can tow large cargo trailers.
No Radio:  SdKfz 10s are not fitted with a radio and will suffer the No Radio penalty as noted within the BGWWWII rules.
Half-Track Truck:  All models will use the rules for half-tracks for purposes of movement but will be considered a truck for all other purposes unless fitted with an armored cab or have a weapon with a gun shield mounted on it.  Armored cabs will have armor on those locations that are covered and crew will benefit from a weapon's gun shield when appropriate.
Armored Cab & Ablative Armor:  Many SdKfz 10s were up-armored in the field by their crews by installing an armored cab and addition armor plat to the front to protect the vehicle's engine.  Note that the armored cab modification will be WYSIWYG so determine the locations covered by the actual piece on the battlefield.  Availability for this field modification is a 5 or less.  AV for the armor will be at the most a 1 for each location covered.
SdKfz 10:  This model serves as a prime mover.
SdKfz 10/1:  This model is a chemical detection vehicle.  Use the special rules for Chemical Detectors in the BGWWWII rulebook as normal.
SdKfz 10/2:  This model is used as a chemical decontamination vehicle.  Use the special rules for Chemical Decontamination in the BGWWWII rulebook as normal.
SdKfz 10/3:  Chemical weapon sprayer.  The vehicle is fitted with a 130 gal tank filled with a smoke or chemical gas mixture that produces a smoke screen for advancing units or used to deploy chemical warfare agents directly onto the battlefield.  The vehicle will produce a wall of smoke behind it the length of its movement at a height double of the vehicle's actual height.  The smoke trail it leaves behind will act like any other smoke as noted in the main rules.  This weapon has no armaments and if the canisters are penetrated they will burst using a large HE template that will release all its gas at one time.  Ignore the wound rings on the HE template and just effect the models within it if it contained a chemical weapon.  Once released, treat as any other smoke on the battlefield.
SdKfz 10/4 & SdKfz 10/5:  Both these models mount a 20mm flak gun, either the Flak 30 or the Flak 38.  The flak guns have a 90-degree field of fire to the front but if the crew spends a single action to unfold the the crew compartment the gun may rotate a full 360-degrees.  Both models are issued the SdAh 51 or 52 ammunition trailer that stores the weapons ammunition.
SdAh 51 & SdAh 52 Munitions Trailers:  These trailers carry additional ammunition and stowage for the towing vehicle.  The trailer is considered to have a 0 AV and if penetrated it will explode with the result of a Medium HE  template.