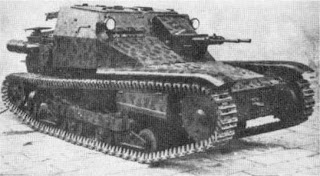 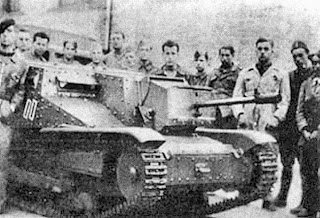 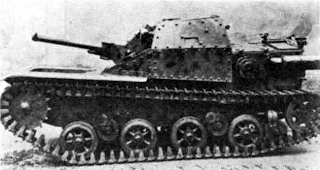 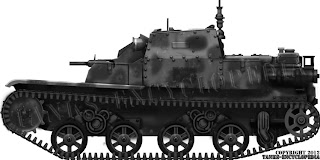 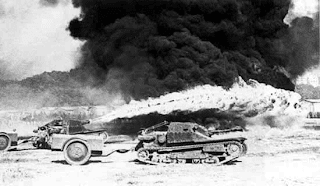 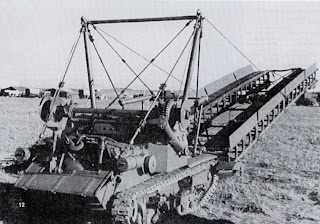 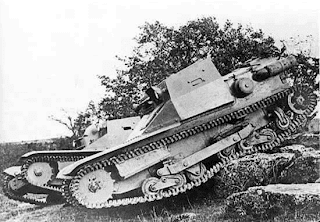 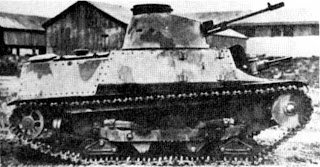 Notes:  Like all of Italy's armored vehicles, this thing was totally outclassed at war's opening but if your fighting Ethiopians it might be pretty lethal.  Maybe.  Anyway, these vehicles would meet their end in the fighting in North Africa and Greece or wherever the Italians were unfortunate enough to be fighting.
Date Introduced:  Mid '33
Users:  Italy, Austria, Albania, Brazil, Bolivia, Bulgaria, China, Croatia, Hungary, Spain, Nicaragua, Iraq, Dominica Republic & Afghanistan
Vehicle Chart:  We use the Universal Carrier chart in the Crusade for Empire supplement and just modify where needed.
Crew:  2 (commander & driver)

Radio:  The only model of the L3 series to be fitted with a radio is the Italian Centro Radio model.  All other models suffer the No Radio penalties as noted in the main BGWWWII rules.
Riveted/Bolted Construction:  L3/33s had riveted or bolted armor construction and will suffer as such if struck at the appropriate locations by enemy fire.  Any non-penetrating hits to a location with rivets or bolts will force any crew that might be at that location to take an immediate D column hit.  Apply any effects as normal with the exception of any MC or Suppression results will be considered -1 action for the effected crewman for the remainder of the battle.  Apply what locations are covered by this rule via the WYSIWYG rules.
Open-Topped:  The Semovente L3 da 47/32 and L3 Passerella models are Open-Topped and will suffer as such when taking fire from elevated positions or under a HE template.
Commander as Gunner:  The commander acts as gunner for all of the various models of the L3.
MG Jamming:  All Italian machine guns will Jam on a 18 or greater unless otherwise noted.
L3/33:  This model is armed with a single 6.5mm Breda machine gun.
L3/35:  This model is armed with dual 8mm Breda machine guns.
L3 CC AT Tank:  Some L3/35s were upgraded with the 20mm Solothurn anti-tank rifle that took the place of the vehicle's machine guns.  The rifle has a ROF of 2, uses the HMG range band and has an AP of 11.  The rifle will have the effect of a LCMG-7 on the effects chart when used against infantry targets and a +3 to the Vehicle Effects Chart.
Spanish "Usurped" L3/35:  These vehicles were fitted with the Breda 20mm auto-cannon in place of the normal dual machine guns.  The Breda has a ROF of 2, uses the HMG range band, has an AP of 10 and will use the LCMG-2
L3/38:  This model has its machine guns replaced with a single Breda 13.2mm machine gun.
Brazilian CV33/II:  This model is fitted with a single Madsen 13.2mm machine gun.
L3 Centro Radio:  This model is fitted with a radio set but will otherwise act like any other L3/35.
L3 Lf:  This model has been upgraded with a vehicle-mounted flamethrower that has replaced one of the vehicle's machine guns.  All vehicle-mounted flamethrower rules are in play as normal.  Note that the L3 Lf model used both a trailer to house the flamethrower's fuel as well as a built-in fuel tank in later models.  Use the WYSIWYG rules for what rules to use via the model's actual depiction.
L3 Passerella:  This model has replaced any weaponry with the addition of a mobile bridge system.  It takes the crew 2 actions to deploy the bridge and the bridge can hold up to 10 tons.
Carro Veloce Recupero:  This model is used as a recovery vehicle and has been fitted with a tow bar for towing duties.  The vehicle will act as any other L3 with the towing characteristic.
Semovente L3 da 47/32:  This model has the crew compartment opened and a Cannone da 47/32 M35 mounted in the front of the hull.  The gun has a 180-degree field of fire to the vehicle's front.  Although the crew are exposed, they will not receive the bonus as such due to the tight space of the fighting compartment.  The Cannone da 47/32 M35 fired both AP, HE and HEAT rounds.  Technically this only made it to a single pilot vehicle but this is Weird War so field as many as you want.  Note that the commander acts as the gunner and will suffer the No Commander penalty when firing.
L3 Tank:  This model was fitted with a rotating turret armed with a 20mm Breda auto-cannon.  Although this thing never made it pass the prototype stage, this is Weird WWII so have at it.
Wargaming Piece:  I don't know of any 1/48 or 1/50 model kit or toy of the L3 o if you do let us know.