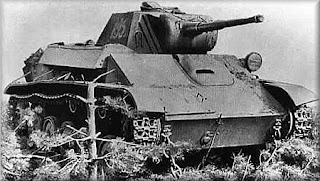 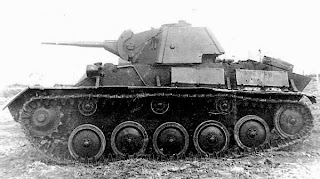 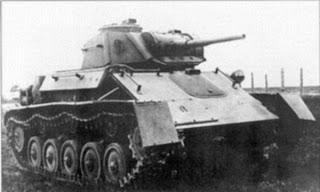 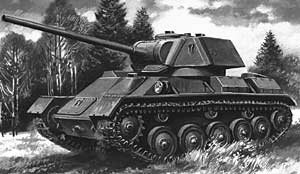 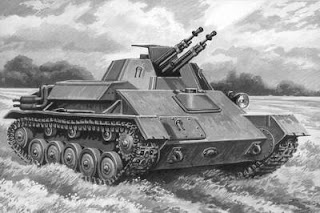 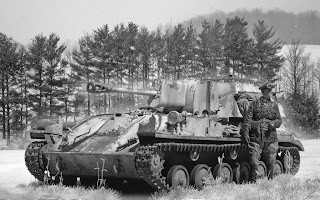 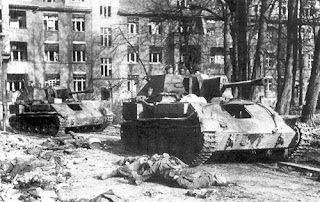 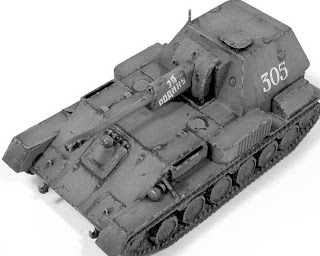 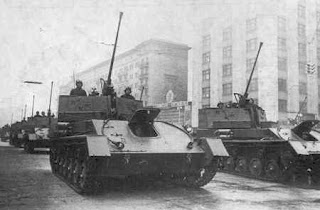 Open-Topped:  Any Open-Topped models will be bound by those rules as such.
T-70 & T-70M:  Both T-70 models mounted the 45mm L/46 gun Model 38 that was capable of firing AP, APCR & HE rounds.  Availability for APCR rounds are a 5 or less with D6 rounds available.
VT-43 Gun:  This rare upgrade to the T-70 gave the 45mm a little more range and penetration.  Availability for this upgrade is a 5 or less.
Commander as Gunner & Loader:  The commander acts as loader and gunner and it will take them an action to load and then an action to fire.  The commander may not be exposed while loading or firing and will always suffer from the Buttoned-Up and No Commander penalties on all fire.
Pistol Ports:  These ports allowed the commander to fire their side arm from within the vehicle usually at assaulting enemy infantry.  The commander may fire their pistol or machine pistol out of a pistol port by using an action in doing so.  All pistol ports have a 90-degree fire arc and will always suffer a 1/2 To Hit penalty.  Note that prone infantry 1" away from the vehicle cannot be hit by fire from these ports and infantry within 2" will receive partial tank cover from fire from the pistol port.  Use the WYSIWYG rules to determine the port location.
T-80:  The T-80 is an modified model with the addition of a 2-man turret.
Commander as Loader:  The commander serves as loader for the main gun of the T-80.  The commander may not direct fire on an action where they load the main gun, but may direct fire in a subsequent action to avoid the No Commander penalty.
T-80 w/VT-43 Gun:  This model has an upgraded VT-43 Gun that fires AP, APCR and HE.  Availability for APCR is a 5 with D6 rounds available.
T-90:  This T-70's turret has been replaced with an open-topped model with duel 12.7mm DShK machine guns.
AA Use:  The T-90 is capable of engaging air targets and will be bound by the AA Use rules as such.
SU-76 & SU-76M:  These models are roughly the same in gaming terms.
Self-Propelled Gun:  The SU-76 and SU-76M will benefit from the Self-Propelled Gun rules as noted within the BGWWII rules.
Auto-Penetration:  Due to the open fighting compartment, any hits to the rear 17-20 hull locations will negate any roll for penetration and will automatically roll on the Penetration Effects Chart  instead.
SU-76B:  This model has a fully enclosed fighting compartment but otherwise the same as the other models.
76mm ZIS-3Sh Gun:  The 76mm ZIS-3SH is capable of firing AP, APCR, HEAT, HE, incendiary, fragmentation, smoke and gas rounds.
Gun Traverse:  All SU-76 models gun may traverse up to 12-degrees to the left or right before it will have to move to engage its target.

Indirect Fire:  All SU-76 models are all able to use indirect fire.  The gun has a minimum range of 45" and has an unlimited maximum range when using indirect fire.
APCR:  Availability for APCR rounds is a 5 with D6 round available.
Fragmentation Round:  These rounds were specially designed to produce a much more lethal attack against infantry by permeating the area with deadly shrapnel.  Use the normal HE rules with the exception the blast will lose it's outer most ring, the AP is halved and any infantry caught underneath the template will receive an additional -2 to the Effects Chart.
ZSU-37:  The ZSU is fitted with 37mm auto-cannon in an open-topped turret.
SU-11 & SU-17:  These prototypes mounted the same 37mm auto-cannon as the ZSU-37 but was found to have poor engines and where not produced.
SU-72:  This prototype was fitted with the same 37mm gun but fitted within a fixed turret.  This model's engine performance to be lacking and was never produced.
AA Use:  The ZSU-37, SU-11, SU-17 and SU-72  is capable of engaging air targets and will be bound by the AA Use rules as such.
Auto-Penetration:  Due to the open fighting compartment, any hits to the rear 17-20 hull locations of these models will negate any roll for penetration and will automatically roll on the Penetration Effects Chart  instead.
German Prime Mover:  The Germans were masters of ingenuity and with all the captured Russian armor procured during the early months of Barbarossa many T-70s were converted to prime movers.  The Germans simply detached the tank's turret and used it as a prime mover which accommodated the crew and ammunition for the weapon.  Up to 4 crew for the weapon can ride within the vehicle but any more will have to ride atop of it.  This conversion is also considered Open-Topped and suffers from the normal Captured Use ID rules as noted within the BGWWWII rulebook.
Wargaming Piece:  These are a couple companies that make the T-70 and SU-76 so just do a quick search on the ol' internet and see what you can find.