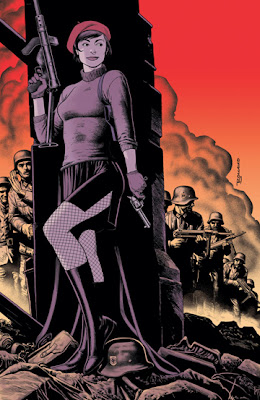 Origin:  Marie grew up in a small farming community where she reveled in hearing stories of how her father and grandfather fought the Germans in WWI.  Due to her family’s service, she grew to be a ardent French patriot and when the Germans occupied France Marie and her family instantly joined the French Resistance.  After several successful sabotage missions against their occupiers, a fellow member betrayed Marie’s group and a massive firefight ensued as the Germans attacked.  In it, all of her family and fellow Resistance fighters were killed but her.  Marie escaped and vowed vengeance for the loss of her family and the dishonor to France by the Germans and their allies.  To this day, Marie is considered the most famous and respected leader of the Underground by all its varied members and is also the most wanted by France’s occupying forces.  Her red beret is now a symbol of resistance and patriotism for all the French.  Since the Allied landings in Normandy, Marie has become indispensable in helping the forces of freedom fight against those of fascism.  It is also rumored that she is in a romantic relationship with a fellow freedom fighter, an American infantry sergeant by the name of Rock.  Although this is just rumor, Marie has assisted Rock in many engagements during the course of the American advance through France.
Name: Marie (last name unknown)
Occupation:  Leader in the French Resistance
Nationality:  French
Political Affiliations:  None
Military Affiliations:  French Resistance
Base of Operations:  France
Height:  5’ 1”
Weight:  97 lbs.
Eyes:  Blue
Hair:  Brown
Appearance Date:  Mid ‘40
Actions:  Marie has 2 actions per turn as normal.
Senses:  Marie acts like anyone else when making any sensory-based tests.
Strength & Toughness:  Marie possesses the normal strength and toughness of a woman of her age that is engaged in intensive physical activity.
Movement:  Marie moves at the normal rate.
Training:  Marie has been extensively trained in all weapons and explosives of Allied and Axis design by members of the OSS so she will not suffer from any Unqualified, Captured Use or Crew Served rules unless the technology is more advanced for the time or is alien or supernatural in nature.  She is also extremely proficient in the art of camouflage and a master of disguise allowing her to pass through any checkpoint at a normal MC.  Although she has no formal military tactical training, Marie’s ability to organize ad hoc units and deploy them effectively on the field of battle is second to none.  Marie also speaks several languages of European decent.
Morale:  Marie is considered a 17-2 Elite Leader ignoring all Man Alone, Enemy Vehicle and Breaking Points rules.  She also has a Command Range of 16” to all Resistance units on the field.  Marie will never lead any standing military units but they can benefit from her Morale while in base-to-base contact with her.
Weapons & Equipment:  Marie may be armed with any weapons or explosives within the combined Axis and Allied arsenals.  However due to the lack of spare parts and ammunition, Marie will JAM one number less then the weapon’s profile she is armed with states.
Set-Up:  Marie is able to be deployed anywhere on the battlefield just as long as she is not within 4” of any known enemy troops or vehicles.
Concealed Status:  Like other Resistance fighters, Marie is a master of stealth.  This is due to her knowledge of the surrounding terrain or her ability to pass herself off as any other French citizen.  Because of this skill, she is always considered to be Concealed whenever being sighted against.
Demolition Specialist:  Marie is a master at demolitions and will always have up to 3 demo charges or may set-up up to 5 booby traps anywhere on the battlefield.  The booby traps will be noted in secret on a piece of paper before the battle begins and will only be discovers once tripped or discovered.  Alternatively, Marie can destroy a single piece of terrain on the battlefield per turn if she so desires.  This cannot be any larger then 8”x8” and cannot have been occupied by any enemy units or vehicles before the battle began.  The destruction of the terrain is complete causing it to collapse and killing or destroying anything that may be in it during its destruction.  Note that the charges will never be discovered even if enemy units are searching for them as Marie has had ample time in concealing them before the battle.
“Viva la France!”:  Note that Marie will only fight in France and will not participate in any combat outside of her own country.  She is also of no one political persuasion so she will fight with any type of French resistance fighters that might be present as long as it is against Axis or the Vichy French puppet government forces.
Wargaming Miniature:  Artizan Designs makes an excellent mini that would work as Marie.  Swing over there and take a look.
Posted by Weird WWII at 9:55 AM