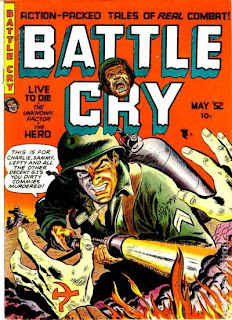 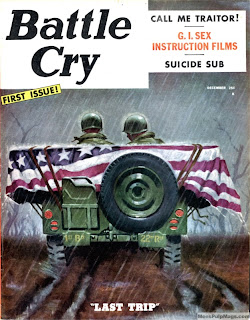 Battle Cry 1 (magazine)
(It's actually number 21 since it continued from where the comic numbers left off.)

Battle Cry was first an anthology war comic in the 50s that would soon change its format to a men's magazine after the Comic Code bullshit hit the comic industry.  The title would last until the 70s with it eventually ending up as a great pulp trash mag like the rest did. But in its early days it was more of a serious publication that had many of its articles written by vets about their own experiences in the service.  In fact, Audie Murphy wrote up a story of his exploits within its pages in the 50s which is considered by some as one of the best articles in the whole genera.  Its a great publication in any form so if you see one in the bargain bin at your local book store or on the back of the toilet at your grandfather's house, give it a gander as see what you think.

Another great bit of reading,
Brian
Posted by Weird WWII at 5:03 AM