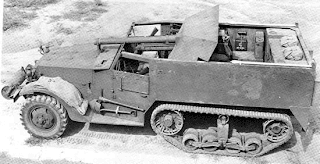 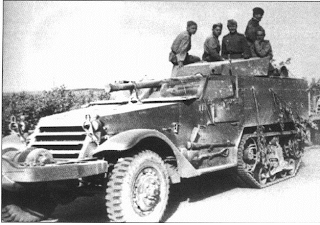 Notes:  The T48 was a vehicle designed by the US solely for sale to other nations under the Lend-Lease program.  The T48 was essentially a M3 GMC with a M1 gun fitted within the troop compartment.
Date Introduced:  Late '42
Users:  Commonwealth Nations (T48 GMC) & Soviet Union (SU-57)
Vehicle Chart:  We use the M3 vehicle chart in the Islands of Glory supplement and modify where needed.
Crew:  5 (commander, gunner, 2 loaders & driver)
No Radio:  Both models were not fitted with radios and will suffer the No Radio penalty as noted within the BGWWWII rules.
Open-Topped:  The vehicle is open-topped and will be bound by the normal rules as such.
Tarplin Cover:  This model is equipped with tarps as basic kit.
Fighting Compartment:  The vehicle's fighting compartment was cramped for the 3-man gun crew and will not benefit from the normal Self-Propelled Gun load bonuses.
M1 Gun:  The vehicle is fitted with the 57mm M1 gun that is capable of firing AP, APCR, HE and canister rounds.  The gun has a 20-degree field of fire to the vehicle front.
Russian ZiS 2 Gun:  Some SU-57s were upgraded to carry the 57mm anti-tank gun M1943 ZiS 2 which fired AP, APCR, fragmentation HE and canister rounds.  Availability for this upgrade is a 8 or less in 1943 or later.
57mm Canister Round:  Both the M1 and ZiS 2 guns were provided with canister rounds.  These rounds were in essence a large shotgun that fired steel balls in a devastating short ranged pattern.  To fire one of these rounds use the normal rules to fire the man gun and then place the 57mm Canister template 6" directly forward of the barrel and roll as normal for anything under the template.  Anything within the path of the 6" before the template is placed is considered to be hit on an A column hit.  Note that because the round is in essence a shotgun shell, it can be used whilst on the move without the normal To Hit modifiers.  The Availability for the T48 is a 5 or less if after early '45 and a 10 or less for the SU-57 if after '43.  If available, the vehicle will have D8 rounds available.
Russian Fragmentation Rounds:  The Russians designed a special fragmentation HE round that was more deadly to infantry then normal HE rounds.  Use the Small blast template with an additional -2 to all results on the Effects Chart.  Because of the nature of this round, its AP is only a 6 with a +4 to the Penetration Effects Chart.
Gun Shield:  All vehicle models were fitted with a gun shield that provided the gun crew with a +5 cover modifier.
Snow Chains:  Snow chains were fitted to the tires of vehicles to help them better grip onto icy surfaces.  If a vehicle has snow chains then it will receive a -1 bonus to any Bog Checks mode on icy or snowy roads.  Availability is a 10 or less on the forward wheels.