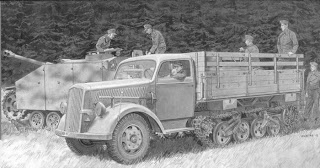 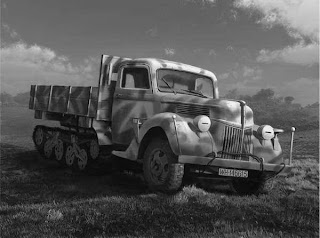 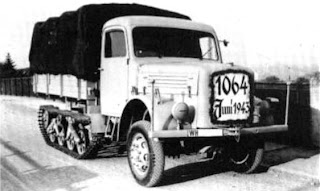 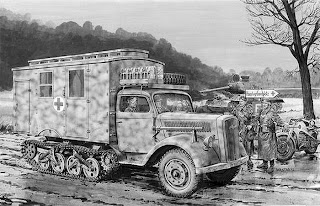 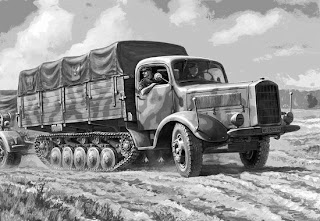 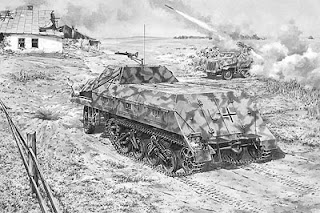 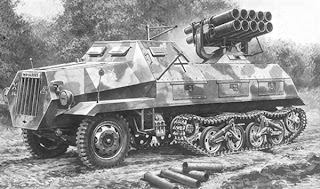 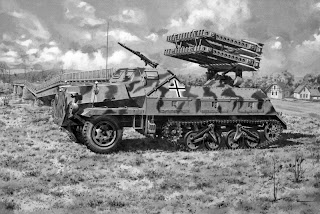 Notes:  The Mule series of half-track trucks were designed in response to the poor road conditions on he Russian front and to give rocket artillery better mobility on the battlefield.  The Opel, Ford and KHD 2-ton and Mercedes-Benz 4-ton truck chassis were chosen to be fitted with the rear track.  Later an armored version would be produced and used as a mobile rocket system.  These things make great general transport for any game so be sure to pick some up.
Date Introduced:  SdKfz 3 (Late '42), SdKfz 4 & SdKfz 4/1 (Mid '43)
Users:  Germany
Vehicle Chart:  We just use the truck vehicle chart found in the main rulebook and just modify were needed.
Crew:  All models have a crew of 2 (driver & asst. driver)
Cargo:  The SdKfz 3 models can transport up to 20 passengers and the 3/5 model up to 30 or up to several tons of cargo.  The SdKfz 3/4 can carry 9 litters with 2 orderlies or up to 10 walking wounded plus 2 orderlies.  The SdKfz 4 is capable of carrying up to several tons of cargo.  All vehicles are capable of towing small trailers or equipment as normal.
No Radio:  Maultiers were not fitted with a radio and will suffer the No Radio penalty as noted within the BGWWWII rules.
SdKfz 3 Models:  These models will use the rules for half-tracks for purposes of movement but will be considered a truck for all other purposes.
SdKfz 4 Models:  The SdKfz 4 is used as a munitions carrier for the SdKfz 4/1 model rocket launcher.  This model will be considered a half-track in all situations.
SdKfz 4/1:  If any incoming fire strikes the rocket launcher when it is armed, the rockets will detonate as normal on a roll of 8 or less.  The detonation will also cause an automatic penetration to the vehicle with a -4 to the Penetration Effects Chart.
SdKfz 4/1 AAMG:  The 4/1 has a pintel mounted LMG on the rear of the drivers cab with a 180-degree field of fire to the vehicle's front.  The weapon can only be used if the gunner is exposed on top of the vehicle's bed.
SdKfz 4/1 Rocket Launcher:  The SdKfz 4/1 mounted both the 8cm Raketen-Vielfachwerfer and
15cm Panzerwerfer 42 rocket launchers.  The 15cm Panzerwerfer 42 could be mounted with smoke, gas or HE rockets where the 8cm Raketen-Vielfachwerfer can mount German and Russian 32mm smoke and HE rockets.  Although, this weapon is used to attack targets at long range it is still possible to fire the weapon in a direct fire mode in emergencies.  To do this the crew must first pass a 1/2 Skill Check and then they can move the launcher and then fire it.  The launcher has a -12-degree to +80-degree elevation and may be elevated up or down 90-degrees per action.  Each rocket will roll the Artillery Dice for scatter and all misfires will be ignored and re-rolled and hits will indicate a hit to the intended target.  If there is any intervening terrain or anything else in the rocket's flight plan from the vehicle to its target then it will be hit instead.  To determine the rocket's flight path just eyeball it from the launcher and note the rocket launcher's actual position when it comes to targets.  The rockets Below are the characteristics of the various rockets that can be mounted on the SdKfz 4/1.  Note that the rocket launcher cannot be reloaded and used in a direct fire mode within the time of a single battle.