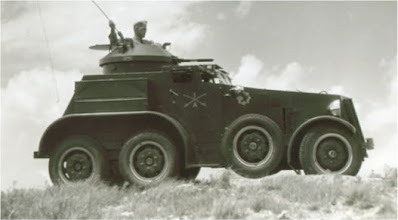 Notes:  In 1934, Cunningham built two prototypes called the T4.  The US Army approved its design and an additional 10 were built before the contract was cancelled.  While the vehicle had good mobility on paved and even ground it showed a cross-country limitation that caused the US Army to cancel its production.  The M1 never saw combat but was kept stateside for training and instillation protection.
Date Introduced:  Mid '34
Users:  United States
Vehicle Chart: We use the SdKfz 232 vehicle chart from the Crusade for Empire supplement for hit locations and just modify where needed.  If anyone makes one of their own let me know and I'll post it up here.
Crew:  4 (commander, gunner, radio op & driver)
Radio:  The M1 is fitted with a radio as basic issue.
MG as Main Weapon:  Because the vehicle's main weapon is a machine gun, the vehicle will not suffer the No Commander penalty when firing.
No Cupola:  Due to the lack of a cupola on the turret, the crew suffers an additional +1 to Sighting Checks when Buttoned-Up.

Vehicle LMGs:  The radio operator and gunner can man a LMG that fires from a firing port at their crew station.  The LMGs have a 90-degree field of fire from their positions to the vehicle's forward and rear.
AAMG:  The mount for the AAMG is mounted on the right side of the turret making it only usable to the right side of the turret.  The weapon has a 180-degree fire arc to the vehicle right side.
Over Worked Suspension:  Due to the over worked suspension, the armored car will suffer an additional +1 to all Bog Checks.
Snow Chains:  Snow chains were fitted to the tires of vehicles to help them better grip onto icy surfaces.  If a vehicle has snow chains then it will receive a -1 bonus to any Bog Checks made on icy or snowy roads.  Availability is a 10 or less.
Police Use:  It is possible that the M1 might have found use with local law enforcement.  If gaming with a large urban police department then the Availability of a M1 in its inventory will be an 8 for a single vehicle.
State Guard Use:  The possibility of the outdated M1 to find its way into a State Guard unit is quite high thus the Availability for a single vehicle is a 10.
Game Piece:  I am not aware of any 1/48 or 1/50 scale toys or kits for this vehicle so if you find one let me know.