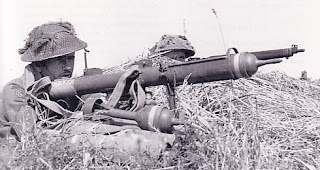 Notes:  The PIAT (Projectile, Infantry, Anti-Tank) is the British's answer for a man-portable AT weapon.  Often hated by its crews for its short range and ass-kicking recoil it would see use all across the globe with no less then 6 VCs being issued to its users.  Not sure if that was for the heroics of its use or them using it in the first place.
Date Introduced:  Early '43
Users:  Britain, Commonwealth Nations, France, Russia and numerous partisan and underground groups.
Crew:  2 (Gunner, Assistant Gunner/Loader)
To Hit:  The PIAT used a unique spring launcher to propell the HEAT projectile to its target instead of a more tradition rocket.  Use the chart below to fire the PIAT.
PIAT To Hit Chart
Range    6"    9"   12"   13"+
To Hit   15    10    5       1
Recoil:  Because of the massive recoil of the PIAT, the gunner must be prone when firing it.  Alternatively, the PIAT may be fired while standing if it rests on a window sill, ledge or other similar surface when firing.
Back Blast:  The PIAT produces no considerable back blast when fired and will not be considered "Infantry Firing" when viewers roll any Sighting Checks against it.
Jam:  The PIAT Jams on a 16+.  If Jammed, the PIAT still fires but it must now be re-cocked in order to fire it again.  To re-cock a PIAT, the gunner must spend 2 actions in doing so with an additional action to load the weapon.
Captured Use:  All Captured Use rules apply with the addition that it will take an untrained user 4 actions to re-cock the weapon if jammed.
HEAT Round Projectile:  The PIAT has a penetration of 30 and is bound by the HEAT warhead rules as normal.  The PIAT's projectile produces a Small HE template that will ignore the outer-most ring.
2" Mortar Rounds:  The PIAT could be fitted with an adapter which allowed it to fire any 2" mortar rounds.  When firing 2" mortar rounds, use the normal rifle grenade rules for the 2" Mortar.
Wargaming Piece:  Most companies who offer Commonwealth catalogs will have a PIAT so just double check before that big army purchase.
Posted by Weird WWII at 10:52 PM