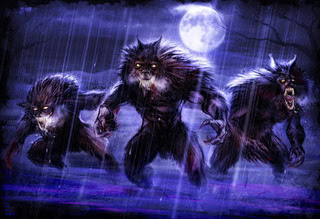 Notes:  You can use these rules loosely on just about any system by just modifying it to the rules you use.  Watch your ass cuz them pups are hungry


Survivors of a Werewolf Attack:  Anyone who is bitten by a werewolf as indicated above and survives the battle is altered substantially.  These people are automatically elevated to an Elite Morale stat with a -3 modifier.  The survivor will never take Morale or Gut Checks or be suppressed and gains a +1” to their movement.  These victims will ignore their first two Light Wound results or a single Heavy Wound result.  The bitten will recover from any Light Wound or Heavy Wound result after D20 turns.  Any KIA result will become a HW instead but all Gory Death results will stand.  The victim will also gain a -1 column shift for all Sighting Checks night or day and can hear up to 6" further then their normal range.  Another characteristic of one who is bitten is that animals become uneasy when in their presence.  This causes any animal within 6” of one who has been bitten to become either frightened or aggressive.  On a D6 roll of 3 or less the animal become hostile and will attack them as normal with a –2 to their final Combat Score.  On a roll of 4+, the animal will flee two full actions of movement in a random direction from the wolf in sheep’s clothing.  Dogs, wolves and other canines are more aware of a werewolf in human form then other animals and can choose to attack, flee or even protect them if so wished.  If the animal befriends the werewolf victim, the animal will be recognized as such if the victim transforms into their werewolf form an will not be considered a threat.
The Transformation:  When a survivor of a werewolf attack encounters a full moon, they will immediately transform into a werewolf for the remainder of the night.  If a werewolf victim is present on the game table when a full moon arises then they will fall prone and expend 2 actions to transform during the first turn the moon rises.  The transformer can do nothing else at this time but scream and wither in pain.  During their transformation, they will scream and howl causing anyone within 2" of them to make a Morale Check with a +5 modifier as they witness the sheer horror of the transformation.  Once the transformation is complete they will be bound by all werewolf rules from then on.
Killing a Werewolf:  Werewolves have been present in human mythology since before recorded time in almost every culture in the world.  They have gone under numerous names and their psychical traits have varied as well, but the one thing that is constant and proven to be fact is that it is hard as hell to kill a werewolf.  Because these creatures are supernatural in nature, it has been found that these creatures will die from just a few rare implements.  The only way to kill a werewolf is to wound it with a weapon made or coated in pure silver, to burn or incinerate it with flame or to cause such trauma to the beast that it is literally ripped apart.  No other means of killing a werewolf has ever been recorded although myths would suggest that there are other means but none have been successful other then the above three.  If a werewolf is attacked with something made or coated with pure silver they will sustain damage as normal but with a -10 modifier to the result.  This represents the degree of lethality silver has against a werewolf.  When using flame-based weapons, werewolves will only be effected if they are touched by the A ring of a template.  Due to the supernatural nature of a werewolf, all A ring hits will be reduced to the B ring.  Any damaged sustained by these types of weapons will stand for the remainder of the battle.  If a werewolf sustains a Light Wound then it will only have 3 actions per turn with a +3 modifier to any rolls made.  A Heavy Wound will decrease a werewolf's actions to 2 with a +5 modifier.  If a werewolf sustains a KIA or Gory Death from a silver-based or flame-based weapon then they are killed outright.  If a werewolf suffers a GD result from any other kind of weapon, they will die on a D20 result of 5 or less.  This represent the sheer damage the attack has caused could have literally ripped the creature apart.  If the roll failed to kill the werewolf then the werewolf is considered to be Heavy Wounded for the remainder of the game with only 2 actions a turn and with the normal +5 to any dice rolls.
Wolf Pack:  It is rare but not unknown for werewolves to hunt in small packs known as a Wolf Pack.  Like their wolf cousins, werewolves are pack animals and have a chain of command within the pack.  The dominant male within the pack is known as the Alpha-Male and is the leader of the pack.  When a werewolf pack is encountered on the battlefield, the Alpha-Male will be considered the leader similar to that of a squad leader for game purposes.  The Alpha-Male has Morale of 19 with a Command Range of 30" to other werewolves in their pack.  If an Alpha-Male is killed then the normal squad rules apply.  Multiple werewolf packs will never run with each other so there can only be one werewolf pack during a game.
Wargaming Piece
There are many werewolf minis in the industry so just perform your Google-Fu and see what you can find.
Posted by Weird WWII at 4:31 PM