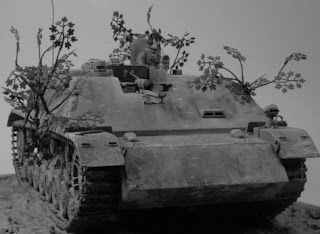 Notes:  This is a completely made up vehicle that uses the very real German X7 ATGM.  Not sure who created the conversion model above so if you do let me know so I can give the mad genus credit.  Be sure to pick up the core Battleground WWII rules to get the most outta these fucking awesome rules!
Date Introduced:  Mid '45
Users:  Germany
Vehicle Chart:  We use the StuG III vehicle chart from the Tanker's Challenge supplement and modify where needed.
Crew:  The JgdPz IV/R has a crew of 4 (commander, gunner, loader & driver)
Radio:  The Speer is fitted with a radio as basic issue.
IR Upgradable:  This vehicle is capable of being fitted with the Sperber "Falcon" IR System as described in the IR Rules.  Availability is an 8 on the Eastern Front and a 5 on any other front.
Winterketten or Ostketten Tracks:  The vehicle may be fitted with the Winterketten track grousers for use in ice and snowy fronts or with the Ostketten track for muddy battlefields.  The Winterketten will provide a -1 to all Bog Checks made in snow or icy terrain and the Ostketten will provide a -1 to all Bog Checks in muddy terrain.  Both tracks types will also negate any High Ground Pressure penalties.  Availability for each is a 8 or less for any front.
X7 ATGM:  The X7 is the worlds first ATGM with a range of 1200m and fitted with a HEAT warhead that can defeat all but the heaviest of Allied armor.  The rocket is launched from its launching rail and is then guided via a wire to the target.  The gunner is assisted by a flare within the rocket's aft that allows them to see the rocket as it goes down range to the target.  It takes the loader two actions to load a rocket on the launch rail and the gunner an action to fire it.  Since the rocket is guided to its target by the gunner, they will use a Skill Check to deliver it on target.  Follow the To Hit Chart below to fire the X7.

Because the X7 uses a wire to guide it to its target, it is susceptible to being cut while in flight by enemy fire or intervening terrain.  These possibilities are reflected in the To Hit modifiers for the X7 below.
X7 ATGM To Hit Modifiers
+3    If fired over any high vegetation like crops, high grass, etc.
+5    If fired through built up areas like buildings, rubble, walls, etc.
+8    If fired out of, through or into woods, jungle, etc.
+15  If fired through a HE blast template or fire template.
+5    If firing on aerial targets.
+2/+1  If firing on the move or in previous action.

Note that the X7 will not suffer from the +8 modifier if it or its target is within 2" of woods, jungle or similar vegetation.  In addition to the mods above, the X7's To Hit will still be bound by all normal To Hit modifiers except for the "Aimed", "Non-Qualified", "Captured Use", Zeroed In" or "Acquired Target".  The X-7 cannot be aimed Zeroed In or Acquire Target and will only hit on a 1/4 SC plus any other modifiers To Hit if used by enemy troops or by non-qualified individuals.  The X7 has a HEAT warhead and will be bound by all the rules as such except for To Hit modifiers for firing a HEAT weapon.  The penetration of the X7 rocket is 40.
Exposed While Loading:  The vehicle's loader is considered exposed to fire from the vehicle's front when reloading a rocket onto the launch rail.  However, any hits will be modified by +5 to the Effects Chart when the loader is exposed.

Nahverteidigungswaffe:  This vehicle is fitted with a launcher in its hull that is capable of firing small shells from within the safety of the vehicle.  The launcher has a 360-degree field of fire and is capable of firing fragmentation, smoke or flare shells.  It will cost the loader one action to load and another to fire the Nahverteidigungswaffe.  The launcher may be rotated 180-degrees and be fired in the same action it moved.  Both the fragmentation and smoke shells produce a Medium-sized template when fired.  The shell's template can be placed anywhere along a 360-degree arc, 2" away from the center of the vehicle.  The crew must be Buttoned-Up and not have a roacket on the launching rail when the Nahverteidigungswaffe fires a fragmentation shell.  Note that if any crew are exposed, the weapon will not be used until they duck down into the vehicle or they Button-Up.  This is due to the possibility of the round striking one of the crew while exposed.
Wargaming Piece:  No kits of this bad boy but if you take your que from the pic above I bet you could convert a JgPz into it with a bit of skill.  If you do make one up let us take a look at it.