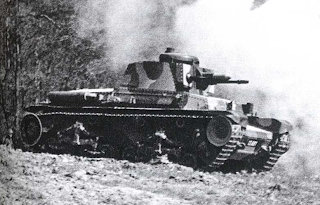 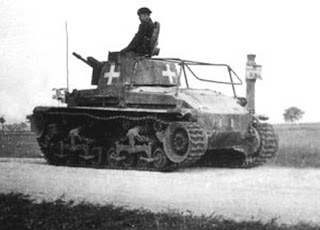 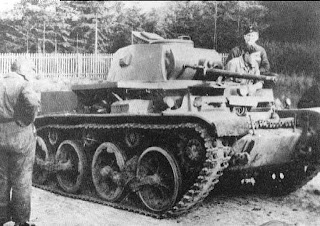 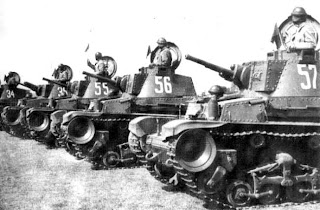 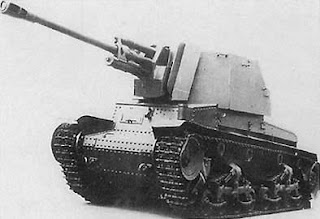 Riveted Construction:  All the models, except for the PzKpfw T-15, has riveted construction of some sort over its production and will suffer as such if struck at the appropriate locations by enemy fire.  Any non-penetrating hits to a location with rivets will force any crew that might be at that location to take an immediate D column hit.  Apply any effects as normal with the exception of any MC or Suppression results will be considered -1 action for the effected crewman for the remainder of the battle.  Apply what locations are covered by this rule via the WYSIWYG rules.
Lt vz. 35/T-11/R-2/S-IIa/PzKpfw 35(t):  All these are basically the same with the exception that the Germans added an extra crewman as a loader for the main gun.  The original configuration had the commander operate the main gun and turret machine gun by himself so the Commander must keep in mind that when performing actions of fire with the main gun.  Due to the commander acting as gunner, they will suffer from the No Commander penalty whenever they fire the main gun.  The turret machine gun is fitted in a ball-mount so treat it as a hull machine for fire arc purposes.  The loader will fire the turret-mounted machine gun in all German models.  The 37mm cannon of all models fires both AP and HE shells.  The German's can have an APCR shell with an Availability of 5 with D6 shells available.  The Czechs, Hungarians and Slovenians used the Lt vz. 35, the Romanians used the R-2, Bulgarians used the T-11 and the Germans used the PzKpfw 35(t) name designations for the same vehicle.  Got it?  Good!
Smoke Launchers:  German PzKpfw 35(t)  models can be fitted with two sets of dual smoke launchers fixed to either side of the hull rear loaded with smoke rounds.  The commander uses an action to fire the launchers in which both will fire a single smoke round that will then smoke the front 180-degrees of the turret's front.  The launchers can only be reloaded externally and it will take a crewman one action to load a single launcher.  If only one set is loaded and then fired, it will only produce a 90-degree smoke cloud to the front side of whatever launcher was fired.  Availability is a 10 or less.
German Panzerbefehlswagen 35(t):  This German model fitted the vehicle with additional radio equipment and a large frame antenna otherwise it is exactly the same as the PzKpfw 35(t) in every way.
German Artillerie Schlepper 35(t):  This German model had the turret removed and the vehicle used as an artillery ammunition carrier.  The hull machine remains and is manned by the commander.  The vehicle was also capable of towing up to 12 tons in addition to its normal load.
Ammunition Carrier:  Because of the amount of ammunition within the the vehicle, it will suffer an additional -2 to the Vehicle Effects Chart if penetrated.
German PzKpfw T-15:  This was a prototype recon vehicle that never got past the field trials but since this is weird war, what the hell and have at it!
Winterketten or Ostketten Tracks:  Any German models from mid '42 on may be fitted with the Winterketten track grousers for use in ice and snowy fronts or from early '44 on with the Ostketten track for muddy battlefields.  The Winterketten will provide a -1 to all Bog Checks made in snow or icy terrain and the Ostketten will provide a -1 to all Bog Checks in muddy terrain.  Both tracks types will also negate any High Ground Pressure penalties.  Availability for each is a 8 or less for any front.
Romanian TACAM R-2:  The Romanians realized that the 37mm gun was greatly outclassed in every way so in tune with the German's Marder series of vehicles, they removed the turret and fitted the vehicle with captured Russian weapons.  The TACAM used the captured ZiS-3 gun is capable of firing numerous types of shells but the Romanians only had stocks of AP and HE rounds available.  The weapon is fired by the gunner and loaded by the commander.

Unarmored Ammo Storage:  Because of the TACAM's poor ammo storage, it was prone to catch fire if penetrated.  Penetration Effects are at a -1 for penetration results against the TACAM.