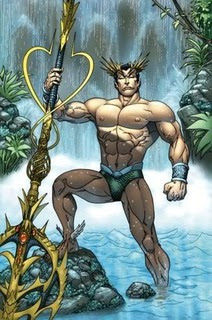 Notes:  Don't let the fish-scaled Speedo fool ya, Namor is one of the strongest and toughest supers during WWII.  If you use him be sure to give the other guy a super to counter him or a platoon of Tigers because the Prince of Atlantis loves to kick some serious fascist ass!  Be sure to pick up the core Battleground WWII rules to use with Namor.
Origin:  Namor is a Homo sapian/Homo mermanus hybrid and son to the Atlantian Princess Fen and the American ship captain Leonard McKenzie.  After the death of his father by some misguided Atlantian soldiers, Namor was raised as a prince of Atlantis.  Namor was taught to hate his human cousins in spite of his mother's opposition.  When he grew to adulthood, Namor attacked a group of divers studying the ocean floor near the underwater city.  The King, his grandfather, then ordered him to retaliate for the human diver’s transgressions against his kingdom.  Namor attacked New York City and if not for the intervention of the Human Torch and a policewoman named Betty Dean, New York would surly be destroyed by the Avenging Son of Atlantis.  Namor and Betty would soon become lovers and through the many adventures together, she would try and teach the Prince of the good in humanity.  But as if to reinforce the ideals taught to him below the waves about humanity, the Axis nations and its fascists armies marched across the globe to crush all that might be good in man.  The kingdom of Atlantis was not immune to this human scourge when it was attacked by a Nazi U-Boat fleet.  The surprise attack caused massive damage and casualties to the kingdom  and even put the King into a coma.  This dastardly deed drove Namor to fight for the side of the Allies and the freedom for all the peoples of the Earth.  With the help from some contacts of Betty, Namor joined the Allies' All-Winners super-team and now fights alongside his old adversary the Human Torch, Toro, Bucky and Captain America for whom he respects greatly.  Even though his mistrust of humanity pops up from time to time, Namor is a powerful ally against the Axis powers and a champion for freedom for all peoples of the world above or below the water.
Name:  Namor McKenzie
Rank/Title:  Prince & General of Atlantis, Special Field Operative
Nationality:  Atlantis/United States of America
Affiliations:  Atlantis, U.S. Government & All Winners Squad
Base of Operations:  Worldwide
Height:  6’ 2”
Weight:  310 lbs
Eyes:  Blue-Gray
Hair:  Black
Actions:  Namor has 3 actions per turn.
Senses:   Due to his hybrid physiology, Namor can see in low-light environments without penalty.  Treat as normal sighting when making Awareness and Sighting Checks in any low-light environment above and below the water.  Namor can hear up to double the normal range above water and the normal range within.  Namor can also hold his breath indefinitely if needed.
Strength Level:  Namor poses incredible strength in relation to both human and Atlantian physiology.  He can press up to 70 tons at a ¼ Skill Check when wet and about 40 tons when not.  He may throw anything up to ten times the normal range.  Things that weigh 1 ton or more may be thrown up to 2D20” with an appropriate Skill Check as listed below.  When in close combat he rolls 3 dice choosing the best result and will never lose against a normal human or Atlantian unless he rolls a triple 20, but this doesn’t apply to super-powered or enhanced opponents.  Namor also has an armor penetration value of 40 with a +8 to the damage result in close combat.

Toughness Level:  Namor is incredibly tough compared to both his respective races.  He is immune to all freezing temperatures and pressure.  His physique is such that he ignores the first KIA received and in addition will never take Morale Checks due to damage.  He also receives a +3 to all damage taken by any means.
Movement:  Due to Namor’s mutated hybrid physique, he is able to move or fly up to 8”, crawl up to 4” and swim up to 15” per action.  Namor may also move from a prone position to standing for free.
Hybrid Mutations:  Namor has two pairs of vestigial wings growing from his ankles.  It appears that these don’t have any functional characteristics but could have something to do with his mutant ability to fly.
Training:  Namor has refused any formal training that has been offered to him by his human allies but he is extremely well versed in a lethal Atlantian martial art that is comparable to that of man’s Tia Kwan Do.  He is well versed in all weaponry and explosives of human and Atlantian design and will ignore all Unqualified, Captured Use and Crew Served rules unless the technology is more advanced for the time or is alien or supernatural in nature.  Namor is an expert pilot of all human and Atlantian aircraft, boats and vehicles of the day and can speak several surface and underwater languages with ease.
Atlantis Prince-At-Arms:  Namor is a 19-4 Legendary Leader with a Command Range of 25” to any forces of Atlantis that may accompany him into battle otherwise he is normally a 18-3 Heroic Leader with a 16” Command Range.
Weapons & Equipment:  Namor rarely uses any kind of weapons other than a ceremonial trident but will do so if the mission or situation calls for it.  His trident will give him a –2 bonus whilst in close combat and may be thrown as far as Namor has LOS with the target.  The trident causes an A column hit with a -5 modifier.  It cannot be used against dedicated armored targets like vehicles or bunkers.  Once thrown, Namor will have to recover it as normal.
Rage:  When enraged, he has been known to commit vile and heinous acts on those who have wronged him on and off the battlefield.  Due to this characteristic, he will never show Quarter unless Captain America is within Command Range or a ¼ Morale Check is rolled at the beginning of the battle.  The Prince will also ignore all fear-based testing, can never be suppressed except when within a blast of 75mm or larger and will never make Gut or Moral Checks in battle.  He also dislikes the Human Torch immensely and because of this he has come to psychical blows with his teammate when fighting together.  Unless Captain America is present on the battlefield, Namor must pass a successful Skill Check when within Leadership Range of the Human Torch.  If he passes his test then he may act as normal, but if he fails he will attack the Torch for D4 actions until he calms down and comes back to his senses.
Vengeful Teammate:  If for any reason any of the All-Winners fall in combat, Namor will automatically become Fanatic and will show No Quarter to any enemy units for the remainder of the battle.  This includes his hated partner, the Human Torch too.
Surface Limitations:  If Namor rolls more than 5 unmodified 20s during a battle above water, he will start to be effected by the dry air.  Any additional 20 rolls will cause a H column hit with no modifiers applied then if another 20 a G, F, etc.  Namor can reverse this by spending one action totally submerged in water or up to D6 actions by dousing himself with a nearby water source like a sink, canteen or puddle.  Once re-hydrated, any damage taken before will reverse in D6 turns as his strength returns.
Gaming Piece:  Heroclix makes several Namor minis so check out the ol' eBay and see what you can get on the cheap.
Posted by Weird WWII at 4:27 PM