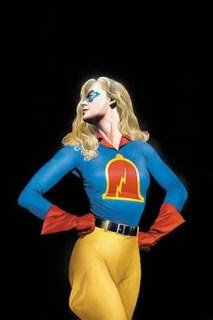 Notes:  Liberty is a great low powered sup that would make a great addition to any superhero or even Weird WWII game.
Origin:  Libby Belle Lawrence grew up an exceptional athlete and student during her school years.  After her graduation from college, she accompanied her father to Poland when he was sent there as an U.S. attaché to Poland.  In 1939 when the Nazis invaded Poland, her father was killed in a bombing raid in Warsaw.  Libby made her way West through the fighting and reached Dunkirk during the evacuation of Allied forces.  Libby was able to board a ship but just as it set sail it was hit and sunk by German aircraft.  Remarkably, she was able to swim the length of the English Channel and arrive in England unharmed.  Her incredible story of escape and her unbelievable swim made her an instant celebrity.  When Libby returned to the United States she became a newspaper reporter and radio commentator who avidly spoke of how the United States should enter the war and defeat the likes of fascism for the sake of all the peoples of the world.  Frustrated at the state of the wold, Libby would take on the cause of freedom and justice herself and became the costumed mystery-woman Liberty Belle.  Libby soon developed strange powers that assisted her fight against criminals and threats against freedom.  When Pres. Roosevelt declared the need to mobilize the United States' mystery-men and women into an organized team, Liberty Belle was one of the All Star Squadron’s founding members.  Libby would soon fall in love with fellow ASS member, Johnny Quick.  Together, the two lovers would protect America’s shores from the Axis fascists.
Name:  Libby Belle Lawrence
Rank/Title:  Special Field Operative, Field Reporter & Radio Commentator
Nationality:  United States of America
Affiliations:  U.S. Government, All Star Squadron & Independent News Service
Base of Operations:  United States of America
Height:  5’ 6”
Weight:  123 lbs
Eyes:  Blue
Hair:  Blonde
Actions:  Liberty Belle has 2 actions per turn as normal.
Senses:   Libby acts like anyone else when making sensory-based tests.
Strength and Toughness:  Libby has the normal characteristics of a woman her age that engages in intensive physical activity and training.
Movement:   Liberty Belle can move up to 7", crawl 4" and leap up to 4" per action. She can swim at normal rate +2" and can hold her breath up to D10+2 actions.
Training:   Libby is an Olympic-level athlete that has extensive training in close combat techniques.  Libby also has limited training in weapons and explosives and will count as being of Regular Troop Quality when using such weapons.
Leadership:   Libby is a 16-2 Elite Leader with a Command Radius of 16”.
Weapons and Equipment:   Libby usually doesn’t equip herself with weapons but if the occasion calls for it she can be armed and equipped with anything within the arsenal of the United States.
The Ringing of the Bell:   When Libby returned to the United Sates, she discovered by accident that every time the Liberty Bell in Philadelphia was rung she was infused with a long lasting adrenalin surge.  It is not known why this occurs but she has partnered with the Bell’s curator, Tom Revere, to ring the Bell when she needs this extra boost.  Liberty Belle will roll a D20 at the beginning of the battle and on a roll of 10 or less, the Liberty Bell has infused her with adrenalin and she will gain the following bonuses:  +2” to all movement and throwing ranges, may stand from a prone position for free, gains an addition –2 in close combat, never takes Gut Checks, is never suppressed unless in a blast, will ignore her first Light Wound and will gain +2 to her Morale for the remainder of the battle.
Sonic Blasts:   Libby developed a sonic blast that emanates from her hands at will.  This sonic blast has a ROF of 2 with the range of a SMG and the result of a LMG.  It also has an AP of 10 in close combat and a 3 when fired at range.
Teammate Relationship:   Libby is romantically involved with fellow teammate Johnny Chambers aka Johnny Quick.  When both are present on the battlefield they will fight together whenever possible.  If either one falls in battle the other will fight as a Fanatic for the remainder of the battle.
Wargaming Piece:  Heroclix does a perfect mini of Liberty Girl so swing by the eBay and get one on the cheap.