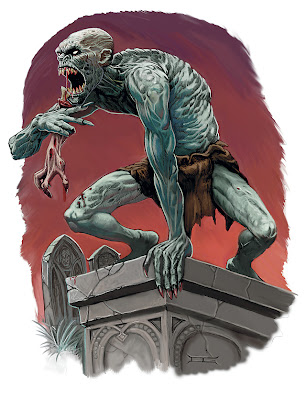 Notes:  These rules are inspired by the excellent ghoul minis produced by Hersey Miniatures.  These are great minis so swing by and pick up a pack or three.  Be sure to pick up the core Battleground WWII rules as well.
Origin:  In the chaos of Weird WWII, whole populations have been isolated by the breakdown of modern civilization, war or by the numerous supernatural threats and calamities that have appeared almost overnight.  Some have resorted to cannibalism in times of extreme starvation and have consumed the dead and even undead in hopes of surviving another day.  Unbeknownst to them, the flesh that sustains them is also corrupting them in ways never believed.  The unknown contagion that drives the dead to rise and feed now alters the very bodies and minds of those who consume it, twisting and deforming them into creatures somewhere between the humans they were and the undead they have eaten.  Now with a supernatural lust for both living and dead flesh, these creatures roam the world consuming all that happen in their path.
Date Introduced:  Ghouls didn't start to appear until mid '45.
Location:  Ghouls have been encountered everywhere across the globe.
Ghoul Types:  Ghouls can be both male or female and these creatures can even bare corrupted children that take after their twisted visage.  Ghouls have the appearance of a twisted and often emaciated human with putrid grey skin.  Their teeth have worn away into fangs and have long, lashing tongues.  Their fingers and toes have warped into long sharp claws they use to kill or incapacitate their prey.
Actions:  Ghouls have 2 actions per turn as normal.
Senses:  A Ghoul's sight and smell have been altered by their transformation which allows them to see normally in both light and dark environments.  These creatures also have a keen smell for living or dead human flesh up to 20" away.  This supernatural smelling can be negated if there are strong pungent odors within the same range.
Strength & Toughness:  Ghouls have the same strength and toughness of a normal human.
Supernatural Phase:  Ghouls take all their actions in the Supernatural Phase.
Movement:  The corruption to their bodies have allowed ghouls to move just as fast crawling as erect so all ghouls may move the normal rate even if crawling.  Ghouls can also leap up to 3" and may rise from being prone for free.  Ghouls act as all other humans when in water.
Ghoul Pack:  Ghouls tend to move in small packs of which all members are blood-related to one another.  Within these packs, each member takes on a certain role within it and one being the Alpha will be considered the Leader for gaming purposes.  All ghouls can be of any Troop Quality for gaming purposes.
Ghouls in Close Combat:  Ghouls have razor-sharp, bone-hard claws and will gain an additional -1 when in close combat.
Carrion:  Ghouls are carrion scavengers and will feed off and steal corpses whenever they can.  If a ghoul comes across a dead human or incapacitated zombie, it will make an immediate Morale Check to see if it can bypass it or if it must secure it for later consumption.  If passed, the ghoul may act however it pleases but if failed it will have to act on the Feeding rules noted below.
Feeding:  If a ghoul wins against a living or undead human in close combat, they will then spend an action to ready it for moving and then must spend however many actions needed to either return it to the pack or to hide it to pick up later once all is clear.  If the ghoul intends to hide the meal, they will move it to any +4 or better cover and then spend 2 actions in concealing it for later pick up.  If the ghoul brings it back to a pack it will spend an action to hand it over to another ghoul and then may act in any way it wishes.  Ghouls will only feed off of human living or dead flesh and nothing else.  Ghouls will feed off each other if the circumstances arise.
Primal State:  Ghouls have lost most of their higher learning during their transformation and are not much more then an animal.  Ghouls are best described as being very ape-like in how they act and communicate but can still use simple items as tools or weapons .  Ghouls can also howl similar to that of a wolf when in need of help or in search of a mate.
Frightening Appearance:  A ghoul's appearance is such that any individual within 5" of them, that hasn't seen them until then, must make an immediate ½ Morale Check to keep from fleeing in horror.  If surprised by a ghoul, any individual in close combat will suffer an additional +2 to their final score.  Other supernatural creatures are immune to this rule.
Zombie Immunity:  Ghouls are fortunate that their most sought after meal has no interest in them and will treat them as a non-mammal in gaming terms.  Ghouls are also immune to any special physiological rules that zombies may cause.  When in close combat, ghouls will always win after expending an action against it and will incapacitate the zombie once done.  With all these immunities, dead ghouls will still return to life as a zombie if killed like any other human.
Wargaming Pieces:  See the notes for some excellent ghoul minis. Heresy Miniatures' ghoul miniatures.
Posted by Weird WWII at 11:04 AM