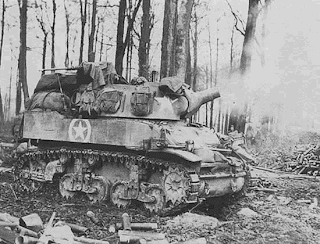 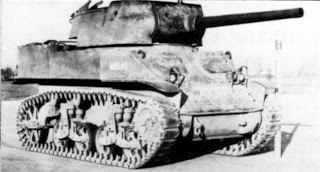 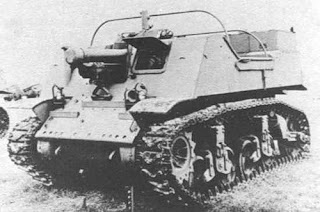 Notes:  The M8 is a modification off the M5 light tank chassis that was attached to light tank units where its added firepower was greatly needed.  The M8 fought in all theaters of the war and would see use with French and Commonwealth armies.  Be sure to pick up the Battleground WWII core rules book to get the most outta these rules.
Date Introduced:  M8 (Mid '42), M8A1 (Early '43) & T82 (Mid '42)
Users:  The M8 is issued to U.S., French & in limited numbers within Commonwealth nations and the M8A1 and T82 is only available to U.S. units.
Vehicle Chart:  We use the M5A1 vehicle chart from the Tanker's Challenge supplement and modify where needed.
Crew:  The M8, M8A1 & T82 all have a crew of 4 (commander, gunner, loader & driver).

High Ground Pressure:  All M8 models and the T82 will suffer from high ground pressure and will suffer a +1 penalty to all Bog Checks as such.
Unarmored Ammo Storage:  Because of the vehicle's poor ammo storage, it was prone to catch fire if penetrated.  Penetration Effects are at a -1 for all models that carry ammunition for a cannon it is mounted with.
AAMG:  The M8 and M8A1 are fitted with an AAMG ring-mount that allows the crew to fire the AAMG with a 360-degree field of fire from within the vehicle.  The ring-mount may be fitted with either a .30cal at an Availability of 15 or .50cal at an Availability of 10.  The T82 can be fitted with a pintel mounted .50cal mounted with an Availability of 10 on the right side of the superstructure that has 160-degree field of fire to the front of the vehicle.  All weapons will have a 2" gun shadow as normal.
Duck Bills:  All vehicles can be fitted with grousers to negate the vehicle's high ground pressure.  The Availability is 10 for these track additions.
Sandbag Racks/Wood Siding:   It was common for vehicles deployed in the PTO to fit numerous sandbags in make-shift racks on the hull to help protect itself against enemy HEAT anti-tank weapons.  These racks will cover locations 3-4 and 7-16 on the HF and locations 9-15 and 17-19 on the HS.  This barrier of sandbags will half any HEAT weapon's AP only once per location covered.  These racks will also cause a +10 penalty against any Close Assault Placement roll against the locations covered using magnetic mines or other similar AT weapons.  Note that due to the increased weight of the sandbags, any vehicle fitted with this addition will have a movement penalty of -2" per action.  The Availability for these upgrades is a 12 for the front hull rack and a 10 for the hull side racks.  In the PTO, it was more common for tank crews to affix wood to the hull to help defend against such attacks and it offers the same benefits as the sand bag racks noted above.  Availability for this type of addition is a 16 in the PTO and a 8 in any other theater.
Open-Topped:  All models are Open-Topped vehicles and will be bound by those rules as such.
Tarpaulin Cover:  All models are equipped with tarps as basic kit.
Gyro-Stabilizer:  The M8A1 is fitted with a gun stabilizer that increases accuracy when firing on the move.  The stabilizers are not very popular with the crews because it takes extensive training and maintenance to benefit from its use and many crews would rather stop and fire instead.  The crew must pass a 1/2 Skill Check at the beginning of the battle to use this piece of equipment.  Any M8A1 with a working stabilizer has a reduced To Hit penalty when moving as noted below.

Moved in previous action    +3 To Hit
Fire on the move                 +6 To Hit
Cullin Device:  During the breakout of the Normandy beach head, the Allies were menaced by the French countryside in the form of thick walls of brush and trees on either side of ancient sunken roads called, Bocage.  An ingenious idea to weld sharpened metal struts to the front of a tanks was implemented in which the tank would bash its way through the Bocage.  For the detailed rules for this upgrade, check out the Normandy Nightmare supplement.  Availability is 3 and only in the ETO.
Indirect Fire:  The M8 and T82 are all able to use indirect fire.  The M8's howitzer has a minimum range of 30" and the T82's 105mm howitzer has a minimum range of 45".  Both weapons will have an unlimited maximum range when using indirect fire.
M8 75mm HMC:  The M8 can fire HE, HEAT, Smoke, WP and chemical weapon shells.  Follow all the normal rules for the appropriate shell.
T30 Canister Shell:  The M8A1 was sometimes armed with the T30 shell which was in essence a large shotgun that fired steel balls in a devastating short ranged pattern.  To fire the T30 just use the normal rules to fire the main gun and then place the 75mm Canister template 6" directly forward of the barrel and roll as normal for anything under the template.  Anything within the path of the 6" before the template is placed is considered to be hit with an A column hit.  Note that because the shell is in essence a shotgun shell, it can be used whilst on the move without the normal To Hit modifiers for firing whilst moving.  The Availability is 15 in the PTO and a 10 for all other theaters with D10+5 shells available.
T82 105mm HMC:  The T82's 105mm howitzer can fire AP, HE, HEAT, WP, smoke, colored smoke and chemical weapon shells.  Follow all the normal rules for the appropriate shell.  Availability for AP and HEAT is a 5 with D6 rounds available.  The weapon has a 20-degree arc of fire to the vehicles front.
Wargaming Piece:  I'm not sure of any 1/48 or 1/50 scale versions of the M8. M8A1 or the T82 so if you know of a kit or conversion let us know.