My wife and I got the kids to sleep early tonight and decided to get in a game.  I threw the the table together and she came up with the mission in which both teams were to exit the opposite edge they start from and that's it.  We played with night rules and also rolled at the beginning of each turn and the one with the lowest score got to add something to the board to slow up the other player without them knowing about it until whatever it was popped up.  We call it the "roadblock" roll.  The opposing player also rolled a D10 worth of zombies and placed them whenever on the board.  With all that said and done, here's how it went down. 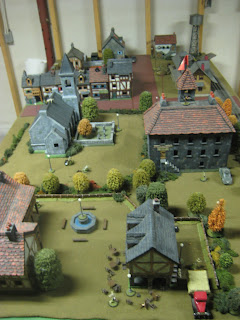 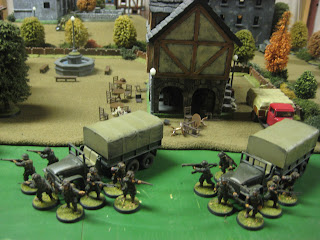 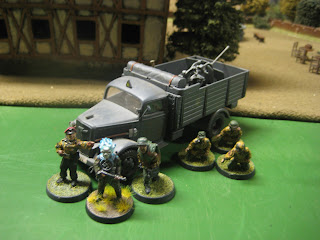 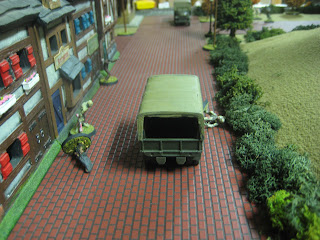 I went first and decided to bring the trucks on from two different directions so I wouldn't get bottled up in case I ran into Amy's surprise.  Amy threw down a group of zeds and I plowed through one and light up another with the BAR team. 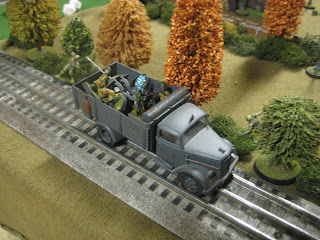 To my surprise, Amy brought her unit on the railroad tracks and she went hell bent for the horizon.  I put down a few zeds to slow her up but she knocked them outta the way with ease. 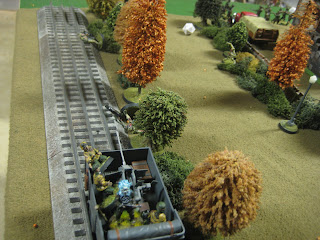 Amy got to go again and again she just floored it over the tracks making all of her Bog Checks with no problem.  The flak crew opened up on the zeds behind the truck and blew them apart while the couple of zombies I placed in front of her where with run down or vaporized by the Flaming Skull. 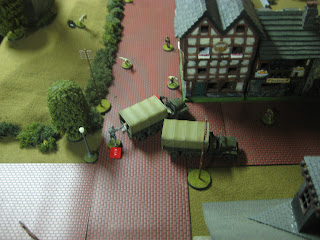 It was my turn again and I realized if I don't start picking it up that she was going to win so I put the metal to the floor and to my horror she told me that she placed a line of anti-tank/personnel mines at the cross roads and sure enough I hit them because of the speed I was going and darkness.  Both trucks became immobilized and adding insult to injury I was swarmed by zeds.

Well Amy got to go again and she just booked right off the board with little I could do.  She had the rolling down with winning every "roadblock" roll as well as brought twice as many zeds that I did per turn.  But overall she had the strategy down and kicked my ass.  It took me longer to get the board setup then it took for her to beat me.

Great job baby but I'll get ya next time,
Brian
Posted by Weird WWII at 3:56 AM