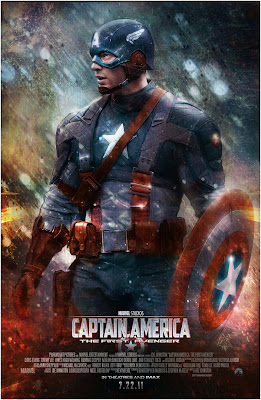 After being labeled 4F for military service, Steve Rogers is recruited into a secret project to create the world's first Super-Soldier.  Once transformed into the peak of human potential, Cap discovers there are more diabolical forces working at world domination then the Axis.  Can Cap and his team stop this menace or will the world be enslaved by them and their super weapons?  I am a huge Cap fan and I thought the film was a lot better then I expected.  Its a great adventure flick but the only thing I got against it is that it isn't Cap vs. Nazis but rather Cap vs. HYDRA and that's stupid!  Marvel took the PC pussy out and made it that way so it wouldn't upset those sensitive sensibilities.  Fuck that!  Cap is the embodiment of kicking the shit outta Nazis during WWII so to go the other way just peeved me.  Anyway, its still a fun flick with tons of action and patriotic fervor so check out the trailer and see what you think.