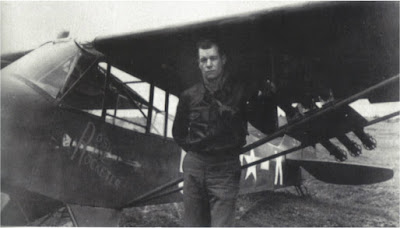 Carpenter and his ass-kicking L-4, "Rosie the Rocketeer".

In 1944, Charles Carpenter was a Major attached to the 1st Bombardment Division in which he flew an unarmed L-4 "Grasshopper" and L-5 "Sentinel" observation plane performing recon missions and acting as an airborne artillery observer.  Not being the kinda guy to overlook a juicy enemy target, even in an unarmed and slow as hell kite with propeller, he enlisted some help of an ordinance technician and had 3 bazooka rocket launchers fitted to each wing.  Now having a bit of offensive capability, the "Mad Major" started to strafe enemy armor whenever he encountered it.  By war's end he would be officially credited with destroying several armored cars and 6 tanks with 2 being Tiger Is!  This hard-charger not only kicked ass in the sky but he once took command of a M4 medium tank and counter attacked a German assault.  In the mayhem, he ordered the fire on a friendly "Dozer" Sherman which luckily only destroyed its dozer and not the crew.  Carpenter was arrested in the field and threatened with a court martial but being the private pilot to the 4th Armored Division's CO and being a favorite of Gen. Patton himself, it led to the striking of the said court martial and he was instead bestowed with the Silver Star for his action.  By war's end, Carpenter was promoted to Lt. Col. and received the Silver Star with Oak Leaf Cluster, the Bronze Star, and the Air Medal with Oak Leaf Cluster.  Carpenter was quoted as saying "Some people around here think I'm nuts but I just believe that if we're going to fight a war we have to get on with it sixty minutes an hour and twenty-four hours a day."  Sounds like he gave his 100% ever time, all the time. 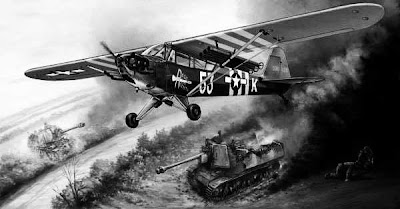 Notes:  These are the rules for "Bazooka Charlie" Carpenter in your battles of Battleground Weird WWII.
Morale:  Maj. Carpenter is considered Elite with a Morale of 18-2.
Airborne FO/Fighter Bomber:  If any scenario, played during or later then '44 in the Western ETO, calls for an airborne artillery observer, it can be good ol' "Bazooka Charlie" on a 5 or less on a D20.  If it is Carpenter, the Allied player may make up to 6 different aerial attacks with Carpenter's aircraft at a single enemy target each attack or a single attack with all six bazookas firing at once at a single target.  All attacks will be at a 1/2 To Hit with all other modifiers as normal.  Each attack will roll To Hit like firing a normal bazooka at extreme range.  It is up to the player to decide what type of bazooka is fitted to Carpenter's plane.  Note that Carpenter cannot call in for artillery if making an attack run with "Rosie".  "Rosie the Rocketeer" can be shot outta the sky like any other aircraft.  As an Airborne FO use all the regular rules as normal.
Posted by Weird WWII at 5:13 PM