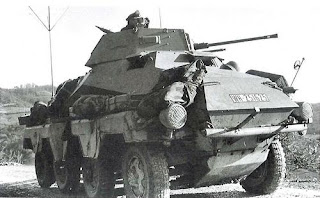 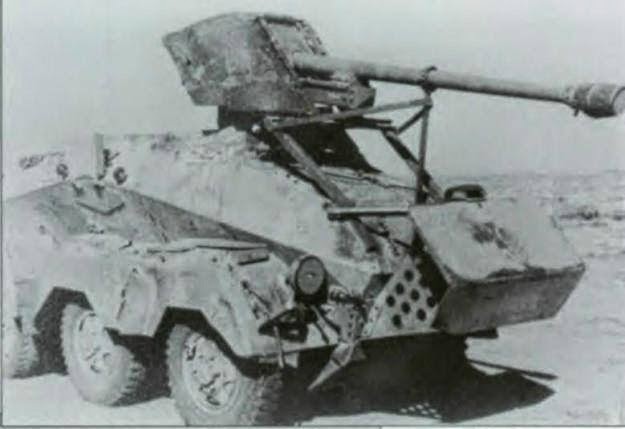 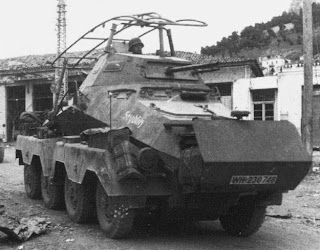 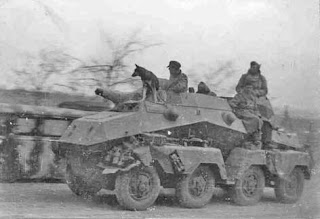 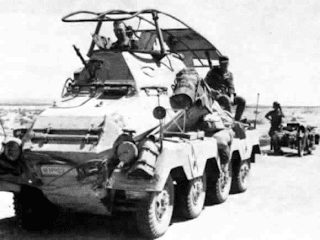 SdKfz 263
Notes:  These models are in essence a up-armored, 8-wheeled version of the earlier 6-wheeled heavy armor cars of the same designation.  These replaced the 6-wheeled versions in '40 and would be found on all front for the remainder of the war.  Be sure to pic up the core Battleground WWII rules and get to Blitzing Western Europe already!
Date Introduced:  SdKfz 231 (Mid '36), SdKfz 232 (Mid '36), SdKfz 233 (Late '42), SdKfz 263 (Mid '38) & PaK 38 model (Mid '41)
Users:  Germany
Vehicle Chart:  There is a SdKfz 232 8-wheeled vehicle chart from the Crusade for Empire supplement that can easily be modify where needed.
Crew:  The SdKfz 231 and 232 has a crew of 4 (commander, gunner, driver& asst. driver/radio op.), the SdKfz 233 & PaK 38 model has a crew of 4 (commander, gunner, loader & diver) and the SdKfz 263 has a crew of 5 (commander, x2 radio ops. & 2 drivers).
Reverse Drive:  All these armored cars are capable of driving forward and reverse at its full speed.  There is a forward and rear transmission and driver's position in each vehicle that allows the crew to get out of trouble as fast as it got into it.  Either driver can take over driving at the beginning of any subsequent action where the other driver has stopped the vehicle.  It is not possible for the drivers to control the vehicle in the same action or for the vehicle to move both forward and reverse in the same action.  The vehicle must come to a halt before the other driver takes control.  If one of the drivers are disabled or their position it unmanned, the other driver may only move half the vehicle's normal speed in that direction like any other vehicle.
Cross-Country Performance:  The vehicle's more sturdy suspension, all wheel drive and 8-wheels gave it improved cross-country performance then its 6-wheel predecessor.  Because of these characteristics, these 8-wheeled models are not penalized with 1/2 movement over rough ground, shell holes, fields, mud, etc. but can move their full speed as normal.
Snow Chains:  Snow chains were fitted to the tires of vehicles to help them better grip onto icy surfaces.  If a vehicle has snow chains then it will receive a -1 bonus to any Bog Checks made on icy or snowy roads.  Availability is a 10 or less on any front.
Pistol Ports:  Each model, except for the SdKfz 233, has various pistol ports found in the turret or hull that allowed the crew to use their personnel weapons against enemy infantry within the safety of the vehicle's armor.  The crew may fire their pistol or machine pistol out of a pistol port by using an action in doing so.  All pistol ports have a 90-degree fire arc and will always suffer a 1/2 To Hit penalty.  Note that prone infantry 1" away from the vehicle cannot be hit by fire from these ports and infantry within 2" will receive partial tank cover from fire from the pistol port.  Use the WYSIWYG rules to determine locations.
Ablative Front Armor:  Later models often have ablative armor fitted to the front of the vehicle to give it added armor protection.  This additional armor will cover HF locations 3-5 & 8-10.  The armor will ignore the first penetrating shot to those locations and then will offer no added protection for any subsequent fire to those locations.  Availability is a 12 for any vehicle post late '42.
SdKfz 233:  The 233 has an open hull that mounts its 75mm gun and will be considered Open-Topped as described in the main rulebook.  The hull mounted 75mm gun has a limited 20-degree arc of fire to the vehicle's front.  Targets outside this arc will force the Stummel to have to move to engage it.  The rear drivers position has been omitted in favor of 75mm ammo storage so the Reverse Drive rules above do not apply to the 233.  The 233's 75mm gun can fire AP, HE, HEAT, smoke and canister shells.
Tarpaulin Cover:  The SdKfz 233 is equipped with a tarp as basic kit.
75mm Kt.Kw.K. Canister Shell:  This shell was in essence a large shotgun that fired 960 9mm steel balls in a devastating short ranged pattern.  To fire the shell, just use the normal rules to fire the main gun and then place the 75mm Canister template 6" directly forward of the barrel and roll as normal for anything under the template.  Anything within the path of the 6" before the template is placed is considered to be hit with an A column hit.  Note that because the shell is in essence a shotgun shell, it can be used whilst on the move without the normal To Hit modifiers for moving whilst firing.  The Availability is 10 with D8 shells available.
SdKfz 263: The 263 had its turret replaced with a heightened hull that allowed for more room within the vehicle for the additional crewman and long range radio equipment.  The vehicle is armed with a single MG34 in a ball mount in the front of the raised hull.  Treat this weapon as a hull-mounted machine gun as described in the main rules.
SdKfz 231 w/PaK 38:  This was a field modification by the Afrika Korps and was in no way a common upgrade.  The rear drivers position has been omitted in favor of ammo storage so the Reverse Drive rules above do not apply to this modification.  Availability is a 5 or less in the North Africa campaign and a 1 for any other front.  The PaK 38 is fitted with a gun shield and has 45-degree field of fire and is considered Open-Topped as described in the main rulebook.  The PaK 38 can fire AP, APCR and HE.  Availability for APCR rounds is an 8 with D6 rounds available.
Wargaming Piece:  I know that several model companies make a 1/48 scale kit for the 232 and conversions for the 233 and 263.  Solido does a 1/50 scale die-cast toy that is pretty common on the web.  Just do some searching and see what you can find.