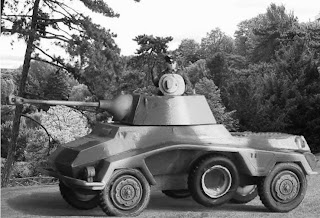 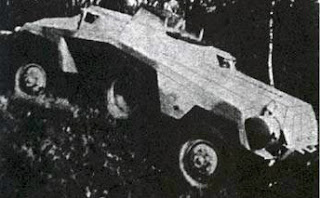 Notes:  This vehicle was meant to replace the SdKfz 222 series of light armored cars using compatible parts with the SdKfz 234 series of heavy armored cars.  The vehicle was cancelled when new criteria for armored recon vehicles were implemented but since this is Weird WWII you can field as many as you can make.  Oh and also be sure to pick up the most excellent Battleground WWII rules for use with these rules too.
Date Introduced:  SdKfz 236 (Late '43) & SdKfz 237 (Early '44)
Users:  Germany
Vehicle Chart:  We use the SdKfz 234/2 "Puma" vehicle chart in the Tanker's Challenge supplement and just modify it where needed.
Crew:  4 (commander, gunner, radio op & driver)
Poor Cross-Country Mobility:  Due to poor off-road performance, both models will suffer a +1 to all Bog Checks in rough terrain.
Snow Chains:  Snow chains were fitted to the tires of vehicles to help them better grip onto icy surfaces.  If a vehicle has snow chains then it will receive a -1 bonus to any Bog Checks made on icy or snowy roads.  Availability is a 10 or less on any front.
Duel Driver Controls:  Both models are capable of full speed in reverse due to a dual driver position in both the forward and rear of the vehicle's hull.  Either driver may take over driving the vehicle in any subsequent action that the other driver brought the vehicle to a complete halt during their last action.  It is never possible for the vehicle to move in two different directions in the same action.  If a driver is driving in the opposite direction in which they are facing then the normal 1/2 movement for reverse driving is in effect.
SdKfz 236:  The 236 is fitted with a 2-man turret that is fitted with a 50mm gun.  In this configuration the commander acts as the loader and cannot be exposed directing fire in the same action they are loading the weapon.
Nahverteidigungswaffe:   The SdKfz 236 is fitted with a launcher in its turret that is capable of firing small shells from within the safety of the turret.  The launcher has a 360-degree field of fire and is capable of firing fragmentation, smoke or flare shells.  It will cost the loader one action to load and another to fire the Nahverteidigungswaffe.  The launcher may be rotated 180-degrees and be fired in the same action it moved.  Both the fragmentation and smoke shells produce a Medium HE template when fired.  The shell's template can be placed anywhere along a 360-degree arc, 2" away from the center of the vehicle.  The crew must be Buttoned-Up when the Nahverteidigungswaffe fires a fragmentation shell or any exposed crew could be hit.  Note that if any turret crew are exposed, the weapon will not be used until they duck down into the turret or they Buttoned-Up.
SdKfz 237:  The 237 has the same chassis as the SdKfz 236 but it is fitted with the turret of the SdKfz 222.  This turret is considered open-topped but is provided with metal screens that prevent enemy troops from throwing explosives into the vehicle.  Any grenades or other explosives thrown into the the open turret of the 237 with the screens closed will cause it to bounce off the screen and fall to a random side of the vehicle on a 15 or less.  On a 16-19, the explosive explodes just as it hits the screen and it will be treated as normal to any crew or passengers covered by the HE template.  On a score of 20, the explosive falls into the vehicle and then explodes and will cause everyone within it a A hit as well as cause an automatic result on the vehicle effects chart.  Crew can still be exposed while the screen is closed and still benefit from its special rules as well as +5 cover to any incoming fire.  The vehicle's auto-cannon was also designed to provided AA defense which allowed the 20mm to be elevated almost 90-degrees.  To use the weapon for AA defense or at targets in an elevated position, the grenade screens must be opened.  Opening the screen to use the weapon in this role is automatic but it will take an action to close them back up as normal.
Wargaming Piece:  I don't know of anyone who makes this prototype vehicle in 1/48 or 1/50 scale kits or die-cast toys but it looks like if you got a bit of cash and time to do some converting that it wouldn't be to tough to make one from a SdKfz 234/1 and SdKfz 234/2 vehicle kit.  If you decide to make one let us take a look!