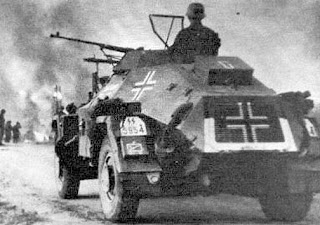 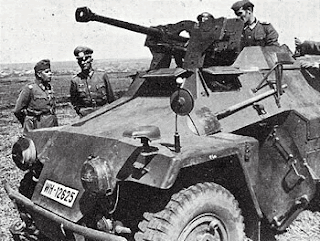 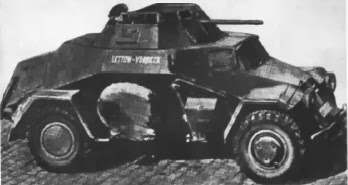 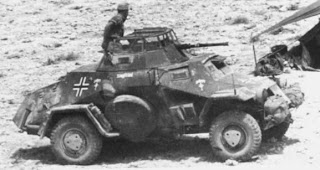 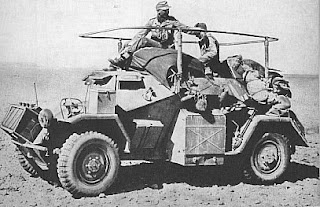 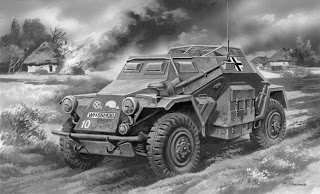 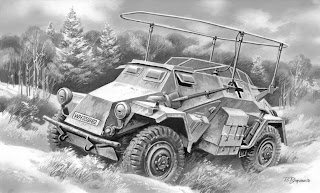 Notes:  This series of light armored cars were attached to recon units until they were replaced by the SdKfz 250 series of half-tracks that offered better off-road characteristics.  This series of armored cars fought on all fronts that German units were engaged in fighting.  Several SdKfz 221s and SdKfz 222s were sold to China early before the war in Europe broke out and several SdKfz 223s were sold to Bulgaria as well.  Be sure to pic up the core Battleground WWII rules to use with these rules for a great little armored car.
Date Introduced:  SdKfz 221 (Mid '35), SdKfz 222 (Early '36), SdKfz 223 (Late '35), SdKfz 260 (Late '40) & SdKfz 261 (Late '40)
Users:  Germany, China (SdKfz 221s & SdKfz 222s) & Bulgaria (SdKfz 223s)
Vehicle Chart:  There is a SdKfz 222 vehicle chart in the Tanker's Challenge supplement that can be used for all models with slight modifications when needed.
Crew:  SdKfz 221 has a crew of 2 (commander & driver), the SdKfz 222 (commander, gunner & driver) and 223 (commander, radio op. & driver) has a crew of 3 and the SdKfz 260 an 261 has a crew of 4 (commander, 2 radio operators & driver).
Open-Topped/Grenade Screen:  All models are open-topped but are provided with metal screens that prevented enemy troops from throwing explosives into the vehicle.  Any grenades or other explosives thrown into the the open hull or turret of the 221, 222 or 223 with the screens closed will cause it to bounce off the screen and fall to a random side of the vehicle on a 15 or less.  On a 16-19, the explosive explodes just as it hits the screen and it will be treated as normal to any crew or passengers covered by the HE template.  On a score of 20, the explosive falls into the vehicle and then explodes and will cause everyone within it a A hit as well as cause an automatic result on the vehicle effects chart.  The deflection for the 260 and 261 is a 19 with a 20 exploding as normal due to the larger screen that fully covers the opening in the vehicle's hull.  If the screens are open then treat as a normal opening in a vehicle with all normal rules as such.  Crew can still be exposed while the screen is closed and still benefit from its special rules as well as +5 cover to any incoming fire.
Poor Cross-Country Mobility:  Due to poor off-road performance, all models will suffer a +1 to all Bog Checks in rough terrain.
Snow Chains:  Snow chains were fitted to the tires of vehicles to help them better grip onto icy surfaces.  If a vehicle has snow chains then it will receive a -1 bonus to any Bog Checks made on icy or snowy roads.  Availability is a 10 or less on any front.
SdKfz 221:  The 221 is armed with a single MG 34 within its one-man turret.  It was also common for 221s to have a loose Panzerbüchse 38 or 39 anti-tank rifle that could be fired from the turret by the commander.  Availability for an anti-tank rife is a 10.  Later models of the 221 were upgraded with a 28mm sPzB41 within a modified turret.  Availability for the sPzB41 upgrade is a 10 if deployed in 1942 or later.   Below are the characteristics for the sPzB41 for use in your games of BGWWWII.
Gun     Type     Gun     Load     AP     HE     HE Size
sPzB41   ATG      28L         1        18       4    Small -E Ring
SdKfz 222:  The 222 has a two-man turret that is fitted with a 20mm auto-cannon and co-aux MG 42. Later versions were fitted with a hanging mount that provided better AA defense which allowed the 20mm to be elevated almost 90-degrees.  To use the weapon for AA defense or at targets in an elevated position, the grenade screens must be opened.  Opening the screen to use the weapon in this role is automatic but it will take an action to close them back up as normal.  Hanging mounts were often retrograded to earlier models so it will have an Availability of 15 for any early models.
SdKfz 223:  The 223 has a single MG34 mounted in the turret that is manned by the vehicle's commander.  The vehicle is also fitted with extra radio equipment and large frame antenna.
SdKfz 260 & 262:  Both the 260 and 261 are unarmed except for whatever weapons their crews are carrying.  The 260 is fitted with a rod antenna and the 261 a large frame antenna with both carrying extra radio equipment.
Wargaming Piece:  There are several companies who make the SdKfz 222 in 1/48 and there was a 221 resin kit out there at one time but I can't remember who so just do some searching on the information superhighway as see what you come up with.