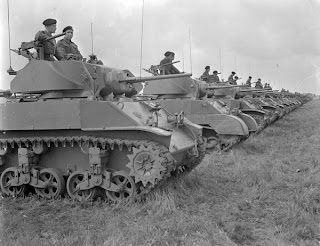 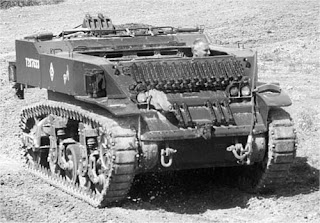 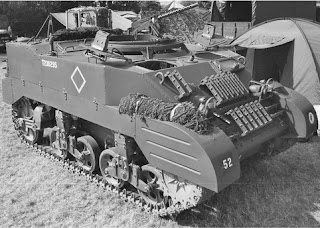 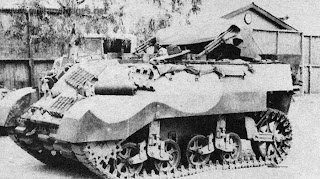 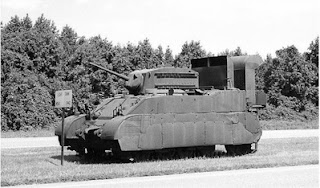 Notes:  The Mk. VI is an upgraded Mk. V that saw limited use by Commonwealth units in the ETO.  Be sure to pick up the Battleground WWII core rules so you can get the most outta these rules.
Date Introduced:  All Mk. VI models (Late '43)
Users:  These rules are meant for Mk. VIs issued to Commonwealth nations.

Vehicle Chart:  We use the M3A1 vehicle chart from the Tanker's Challenge supplement and modify where needed.
Crew:  The Mk. VI has a crew of 4 (commander, gunner, driver, loader) and the Kangaroo, Recce and Command versions have a crew of 2 (driver & commander).  The Command and Recce model can carry an additional 3 passengers and the Kangaroo can hold an additional 5 passengers.
High Ground Pressure:  All Mk. VI models will suffer from high ground pressure and will suffer a +1 to all Bog Checks as such.
Unarmored Ammo Storage:  Because of the Stuart's poor ammo storage, it was prone to catch fire if penetrated.  Penetration Effects are at a -1 for all M5 models that carry ammunition for a cannon it is mounted with.
4" Smoke Dischargers:  All turreted Stuart models have two sets of dual 4" smoke launchers fixed to either side of the turret loaded with smoke rounds.  The commander uses an action to fire the launchers in which both will fire a single smoke round that will then smoke the front 180-degrees of the turret's front.  The launchers can only be reloaded externally and it will take a crewman one action to load a single launcher.  If only one set is loaded and then fired, it will only produce a 90-degree smoke cloud to the front side of whatever launcher was fired.  Availability is 12.

AAMG:  The mount for the AAMG is mounted on the right side of the turret next to the gunner's hatch making it only usable against targets on the right side of the vehicle.  This rule is only for the normal Mk. VI model with fully enclosed turrets.
Fixed Spotlight:  All fully enclosed turreted Stuarts can have a small spotlight fitted to the turret above the main gun's position.  The searchlight has a 45-dergree cone and will illuminate out to 28" directly forward of the turret's current position.   Availability is a 10.
Open-Topped:  The Command, Recce and Kangaroo models are all Open-Topped vehicles and will be bound by those rules as such.
Grenade Screen:  It was common for Recce and Command models of the Stuart to be fitted with large metal screens that prevented enemy troops from throwing explosives or grenades into vehicle's open hull.  Any grenades or other explosives thrown into a vehicle with these additions will bounce off the screen and fall to a random side of the vehicle on a 19.  On a 20, the explosive explodes just as it hits the screen and will be treated as a normal explosive to any crew or passengers covered by the HE template.  Note that crew under the screen can still be exposed and still benefit from the screen's special rules as normal.
M3 2" Mortar:  The Mk. VI Recce model is fitted with a fixed 2" mortar fitted within the front hull between the driver and asst. driver.  The Recce is able to fire a signal, illumination and HE round as well as smoke but because of the weapon being in a fixed position it was much easier and effective to use a grenade, vehicle's machine guns or a hand held flare pistol instead of the M3's other shells.  When using the Recce's smoke or HE round, the round will land 12" directly in front of the vehicle when fired and uses the Small HE template.  Signal flare rounds are of limited use due to the round's low trajectory and will only be seen by those who have LOS to its 12" movement from the vehicle's front.  The illumination round was useless because of its low trajectory and will not be supplied to T8 crews.  The weapon was operated by the vehicle's asst, driver and it took an action to load and another to fire.  Note that any penetrating or non-penetrating round hitting the HF 14 location will neutralize the Recce's use.  Because of the limited use of the weapon, its Availability is 10.
Tarpaulin Cover:  All Open-Topped models are equipped with tarps as basic kit.

M2 Canister Shell:  The M2 shell was in essence a large shotgun that fired 122 steel balls in a devastating short ranged pattern.  To fire the M2 just use the normal rules to fire the main gun and then place the 37mm Canister template 6" directly forward of the barrel and roll as normal for anything under the template.  Anything within the path of the 6" before the template is placed is considered to be hit with an A column hit.  Note that because the shell is in essence a shotgun shell, it can be used whilst on the move without the normal To Hit modifiers for moving whilst firing.  The Availability is 10 in the PTO and a 5 for all other theaters with D8 shells available.
Exposed Gunner's Position:  Any crew member manning machines gun on the Kangaroo, Command or Recce models will only receive +2 cover where as all other crew will gain the +5 Partial Tank Cover modifier.

Gyro-Stabilizer:  The Mk. VI is fitted with a gun stabilizer that increases accuracy when firing on the move.  The stabilizers are not very popular with the crews because it takes extensive training and maintenance to benefit from its use and many crews would rather stop and fire instead.  The crew must pass a 1/2 Skill Check at the beginning of the battle to use this piece of equipment.  Any tank with a working stabilizer has a reduced To Hit penalty noted below.

Moved in previous action    +3 To Hit
Fire on the move                 +6 To Hit
Deep Wading MK. VIs:  Deep wading Mk. VIs are fitted with tall ducts to the engine that allowed the air-tight tank to move partially submerged under water.  These were designed in response to the horrendous actions of the Duplex Drive equipped vehicles during D-Day.  Deep wading Stuarts can transverse water by moving at 1/4 its normal speed while in the water.  If the vehicle or ducts are penetrated while in the water, the tank will be lost and the crew will be KIA unless they pass a 1/4 Skill Check to escape the drowning tank.  All To Hit rolls to a swimming Stuart will be at a +2 due to its small size when in the water.  The Mk. VI can fire its machine guns when partially submerged.  Follow all  amphibious rules as normal.  Availability is a 5.
Wargaming Piece:  There are several companies that make a 1/48 scale Stuart and with a bit of converting you can make just about any of the other models without much fuss.