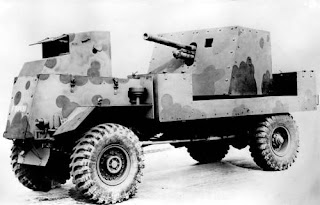 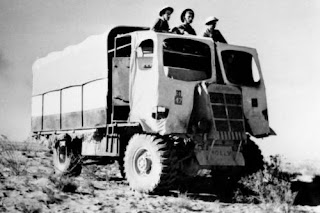 Deacon disguised as a Matador lorry

Notes:  This vehicle came about due to the short supply of self-propelled anti-tank vehicles in North Africa and the always adaptive Brits went to work and the Deacon was born.  The Deacon is a Matador lorry fitted with an armored cab and a 6-pdr fitted within an partially armored turret.  The Deacon only saw service with Commonwealth troops in North Africa but since this is Weird WWII you should throw a few to Burma or as convoy support in Western Europe.  Be sure to pic up the Battleground WWII core rules and the excellent Crusade for Empire supplement which is all about the epic battle for North Africa.

Date Introduced:  Commonwealth (Early '42) & Turkey (Early '44)
Users:  Commonwealth nations & Turkey
Vehicle Chart:  We use the Truck vehicle chart within the main Battleground WWII rulebook and just modify it where needed.
Crew:  4 (commander, gunner, loader & driver)
Armor:  Note that the AV truck is 0 which means that the vehicle's armor adds nothing to the AP of any weapon firing at it.  The attacking Commander must still roll under the weapon's AP to penetrate as normal.
Diesel Engine:  The Deacon is fitted with a diesel engine and will have a +1 added to all penetration effects.
Poor Cross-Country Mobility:  Due to the poor performance of the Deacon it will suffer a +1 to all Bog Checks in rough terrain.
Snow Chains:  Snow chains were fitted to the tires of vehicles to help them better grip onto icy surfaces.  If a vehicle has snow chains then it will receive a -1 bonus to any Bog Checks made on icy or snowy roads.  Availability is a 10 or less on any front.
Pistol Ports:  The Deacon's driver's cab has a pistol port on each side of it allowing the crew to fire their personal weapons from within the armored cab.  Use the normal pistol port rules as such.
Turret Rotation:  The turret may traverse 360-degree but may not fire at targets that are obviously obscured by the driver's cab.
Partially-Enclosed Turret:  The Deacon's turret has an open rear so any enemy fire coming from that direction will auto penetrate or hit the crew without the benefit of the armor plate.  Because of the manner in which the vehicle is set up, the crew could get partial tank cover depending on how its turret is traversed.  Use your best judgement, a dice roll or have a Battle Master make the call.
Truck Camouflage:  The Deacon is provided with a light-weight camouflage kit that gives it the appearance of a regular canvas-covered Matador truck.  This allows the vehicle to move unnoticed by enemy gunners to an optimal firing position and then quickly discards its camo and uses its devastating gun at an unsuspecting enemy.  The Deacon can start the battle as a normal Matador truck and then can transform into its anti-tank role with the crew spending 2 actions in discarding the camo kit then an action to crew their fighting positions.  If the truck takes fire while fitted with this disguise, use the Deacon characteristics as normal.  Enemy observers will recognize a Deacon in its camouflaged kit with a Sighting Check result of 1 at any range or if within 15" of the vehicle with a normal Sighting Check.  It will take the crew 5 actions to put the camouflage kit on the truck.  Truck camouflage Availability is a 10.
Wargaming Piece:  I am unaware of any model of the Deacon so if you know of one let us know.