"The Perils of Gwendoline in the Land of the Yik-Yak" 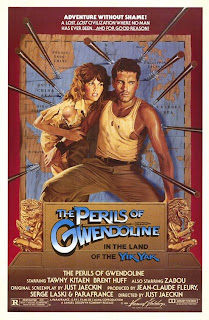 Gwendoline, along with her maid, get in over their heads in 1930s South East Asia when they try to secure her father's legacy.  They are saved by an unwitting dreg who helps them along their journey only because of the promises of cash.  Can these adventurers return from the forbidden land of the Yik-Yak alive and wealthier then they can image or will they vanish without a trace like all the others?  Enough of that hook shit already, this movie is bad!  I don't mean Micheal Jackson's BAD but just bad but it does have lots of T&A and the best of all; Tawney!  Its a low budget wanna be Raiders of the Lost Ark meets Emmanuelle based on John Willie's S&M comic but falls a bit short but still gives us hot naked chicks and lots of crazy fetish stuff so I LOVE it!  It also has one of my favorite 80s wanna-bes, Tawney Kitaen and she is super hot in this flick.  This is really trash pulp at its finest and a must for anyone who loves bad acting, horrible dialog, crappy FX, hot chicks being hot and all things base! Check out the trailer and see if its your cup of trash or not.  If you are a wargamer this movie can give you some ideas on how to game with those half nude, leather clad Amazons you have.  Come one we all have them. Right.  Right?  Ohh, maybe that's just me then.

I love this trash,
Brian

PS
Did I mention it has Tawney in it?!  Yeah, Zabou is pretty hot too. 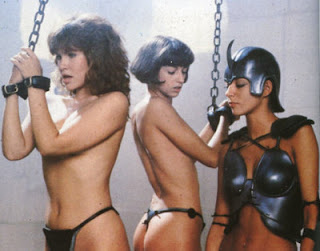