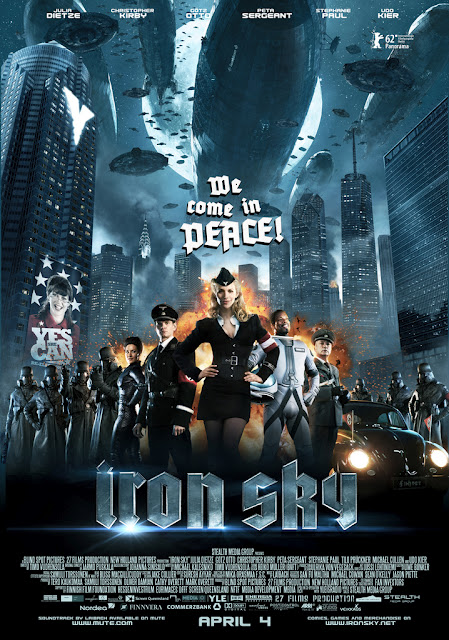 After getting their ass kicked in WWII, some Nazi hardliners and eggheads escape and develop advanced tech that allows them to head to the moon to rebuild the Nazi Reich.  Its 70 years later and the Ratizs are back and trying again to put the world under the Nazi jackboot but Earth's salvation is a spunky and bad ass motherfucker of a pres and she don't take kindly to the Crooked Cross in her town.  Can the Earth repel the goose-stepping menace again or will it succumb to their advanced weaponry, fanatical troops and hot ass, leather clad she-wolf dominatrices?  Can't wait to find out!  Although I was a bit bummed to see this turn to a comedy, it looks pretty well done via the FX.  Lets hope the acting, action and comedy shine through too.  The movie Blitzkriegs Berlin on 4/4 so if you are going to check it out be sure to let the rest of us know how it was.  Take a gander at the insanity and see what you think.

Go get 'em madam president and show them what Americas thinks of the National Socialist Workers Party,
Brian

PS
A little something to inspire our troops against the new Nazi menace!


UPDATE
Finally saw this and it was a let down.  Don't get me wrong, the FX were great, the designs and filming and everything technical was top notch with the acting being not bad as well but the story just made this one tank.  Its as if it was made by two different ideas with the plot be so stupid that it really ruined the hard work of the rest of the crew.  Its worth a viewing just to see it but I wouldn't pay any cash for it unless it was on the cheap.
Posted by Weird WWII at 6:02 AM