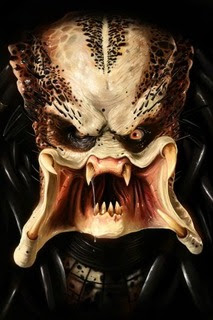 Medicomp:  The Medicomp is the Yautya’s version of a First Aid Kit although much more advanced and capable.  This piece of equipment is fitted with numerous instruments, chemicals, stimulants and other medical paraphernalia that allows the Yautya to see to any wounds they may receive during the hunt.  If the alien spends 2 actions in using the Medicomp on any wound sustained then they will not suffer the +5 penalty for being wounded for the remainder of the battle.

Plate Armor:  All Yautya wear plate armor of various degrees that protects them from harm.  This armor will provide the Yautya with an additional +1 to all wound results.

Mesh Jumpsuit:  The system of wires that rap around the creature is thought to be similar to human combat webbing were equipment, weapons, armor and other pieces of equipment are fitted onto the wearer that allows for optimal performance during a hunt.
Wrist Blade:  These deadly blades vary in size and number but are always attached to the hunter’s wrist.  These would be considered similar to that of a human sword and will provide an additional –2 when used in close combat.
Plasma Caster:  The Plasma Caster is a shoulder-fired weapon that discharges a burst of super hot plasma at its target.  The weapon is aimed via a laser targeter fitted to the Bio-Mask and also moves with the Yautya’s head movements.  The weapon has several settings that allow it to only fire a small burst enough to knock a human-sized target unconscious to a setting that is capable of penetrating the heavy shielding of interstellar spacecraft.  The five settings below indicates the degree of power the plasma burst from the Plasma Caster will fire.  The alien Commander must declare at what level they are using and at what target before any To Hit rolls are made.
Setting-1) This setting is usually intended to knock out a target or to kill small creatures such as a dog or cat.  This setting has the same characteristics of a Pistol except that it will only have a ROF of 1 with an unlimited range.  Any targets smaller then human-size will receive a –2 to the wound result.  Any wounds are considered to have incapacitated the target or killed it depending on what the Yautya player chooses to do.
Setting-2) This is the most common setting for the Plasma Caster when hunting on Earth.  It has the same characteristics of a LMG except that it has a ROF of 1 with an unlimited range.
Setting-3) This setting allows for limited armor penetration against thin armored vehicles or use against large creatures.  It has the same characteristics, as a LCMG except is has a ROF of 1, with unlimited range and has an AP of 10.
Setting-4)  This is yet a more powerful setting used to penetrate dedicated armored targets or use against very large creatures.  This setting has the same characteristics as a 88mm XL cannon.  It has a ROF of 1 and an AP of 40.  Because of the amount of energy used to generate this discharge, it will take the Plasma Caster D4 actions to recharge until it can fire at any level again.
Setting-5) This is the most powerful setting a shoulder-mounted Plasma Caster can discharge.  To fire at this setting, the Yautya must first brace themselves by using an action and then another to fire it.  Failure to brace will cause the weapon to power down until the Yautya does so.  This bracing has to do with activating several devices that compensates for the weapons discharge so as not to harm the shooter.  This discharge has the same characteristics of a 150mm XL cannon.  It has a ROF of 1 and an AP of 60.  Once fired, the Plasma Caster is out for D20+10 actions as it cools and recharges.  The weapon is only capable of firing at this setting twice per battle if it has not been fired at any other setting.  If the weapon has fired before then it will only be able to fire at Setting-5 once and then it will deactivate for the remainder of the battle.  This is done because too use this level of fire is considered dishonorable during a hunt because it is a huge advantage against almost any prey being hunted.  The only reason this setting would ever be used is if the Yautya’s ship is in danger or if instructed to do so by an Elder.  This level is normally used when engaging in open combat with another army and not during a hunt.  The Yautya will never fire this weapon at close range in favor of using a close combat weapon instead.  In addition, the Plasma Caster will never Jam but rather just misses it’s target.  If missed, the target point will be D4” away in a random direction from the intended target and will cause whatever damage it would have normally.  This weapon can be fired whilst submerged in water as well as in the vacuum of space.

Self-Destruct Device:  Every Yautya has a device that is used when they are in danger of being discovered.  This device has similar technology as the Plasma Caster but instead of directing the plasma into a tight burst, this device explodes the plasma into a devastating blast centered on the individual utilizing it.  The temperature of this detonation is well above 1,000,000 degrees and causes devastating damage and destruction to anyone or anything within its blast. The detonation will have a 5D20" radius and anything touched by the blast will be destroyed or killed. The only way to survive this blast is from some type of shelter designed for such attacks, by supernatural means or by some type of defense that would protect against such a blast.

Trophy Hunters:  The Yautya are avid trophy hunters and will always take a trophy of their hunt.  If a hunter kills an armed combatant and is not in any immediate danger of attack, they will drag the body off to any +5 terrain and spend 2 actions preparing their trophy.  Once finished, the trophy will be affixed to the creatures webbing and highly coveted.  The hunter will then act as normal for the remainder of the battle.  Note that this is compulsory only once per battle but if the hunter chooses to take more then one trophy they may choose to do so.  The collecting of trophies is a means for these aliens to move up within the hunting party’s hierarchy so it isn’t uncommon for them to take more then one if possible.

Blood Trail:  Yautya blood glows in a florescent green and can easily be located and followed.  If any creatures is looking for a blood trail during the day a ½ Skill Check is required to locate the blood, but at night it will automatically be seen within 10”.

Suicide:  The Yautya’s most convened ideal is that no alien society must every witness a dead Yautya if possible.  This means that if a Yautya is too injured to return to their ship or that they are on the drink of death, they must destroy all traces of themselves so they are not discovered and defiled by alien hands.  If a Yautya sustains a HW, after ignoring the their first Gory Death, the creature will spend his next action arming their Self-Destruct Device.  The device will then detonate in D6+2 actions after its arming.
Wargaming Piece:  Horrorclix makes some great pre-painted official minis and there are several other mini companies who make a not-Predator so do a little Goggle-Fu and see what you like.
Posted by Weird WWII at 12:00 AM