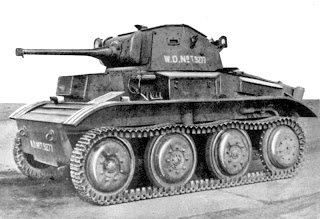 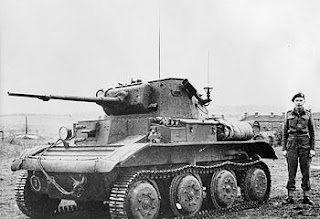 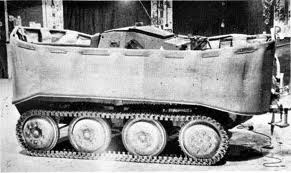 Notes:  The Mk. VII was initially sent to North Africa but it was found that its cooling system wouldn't handle the heat so it was shipped back to the UK.  When the Germans invaded Russia, the Mk. VII was issued to Soviet forces under Lend-Lease in small numbers.  The Tetrarch was able to be transported via glider and would find itself deployed within the UK's airborne corps during D-Day and later operations until it was replaced by the M22 Locust.  Be sure to pick up the BGWWII core rules so you can understand what the hell I'm talking about with the rules below.
Date Introduced:  Tetrarch (Mid '38), Tetrarch CS (Early '44) & Tetrarch DD (Mid '41)
Users:  UK & USSR (standard model only)
Vehicle Chart:  There is a Tetrarch vehicle chart in the "Red Devils in the Night" supplement.
Crew:  3 (commander, gunner & driver)
Wheeled Suspension:  Although fully tracked, the Mk. VII cannot make 90-degree or 180-degree turns or make Dead Track maneuvers.  The tank will also suffer a +1 to all Bog Checks taken due to its unique suspension.
Commander As Loader:  The tank's commander acts as loader to the main gun and thus cannot be exposed directing fire in the same action that is used to load.  Once loaded, the commander can direct fire while exposed in which will negate the No Commander penalty.
Little John Barrel Adapter:  The Little John barrel extension increases the projectile's velocity thus making it a bit more powerful.  All AP rounds are increased to an AP of 22 to those vehicles fitted with this adapter.  The Availability of the Little John adapter is 15 for glider-borne units and 10 for all other units.  This is not available to Soviet models.
Tetrarch CS:  Some Mk. VIIs had their 2-pds replaced with 3" howitzers.  Availability for the CS model in glider-borne units is 10 and 5 for all other units.  The 3" howitzer is only capable of firing HE and chemical smoke shells.
Indirect Fire:  The CS model may use indirect fire with its howitzer.  The weapon has a minimum range of 45" and an unlimited maximum range when using indirect fire.
Fuel Hits:  Any hit, penetrating or non-penetrating, that indicates a fuel hit will indicate that the fuel tank has been ruptured.  The vehicle must make an immediate roll on the Molotov Cocktail vs. Closed Top Vehicle chart to see what the hit has done to the vehicle.  Note that all other effects are applied as normal in addition to the special roll noted above.  If the vehicle survives the hit, it will run out of fuel in D4 actions and become immobilized for the remainder of the battle.  Remember that a pool of fuel will be present as well so take that into account when gaming with the Mk. VII.

4" Smoke Dischargers:  The Mk. VII has two sets of 4" smoke launchers fixed to either side of the turret loaded with smoke rounds.  The commander uses an action to fire the launchers in which both launchers fire a smoke round that will then smoke the front 180-degrees of the turret's front.  The launchers can only be reloaded externally and it will take a crewman one action to do so for each launcher.  If only one set is loaded and then fired, it will only produce a 90-degree smoke cloud to the front side of whatever launcher was fired.  Availability is 19 for all glider-borne unit's and a 15 for all other unit's.  Availability is 5 for Soviet models.
Searchlights:  The Tetrarch has a fixed searchlight fitted in line with the main gun and one fixed just to the right of the driver's position.  Both searchlights will illuminate a path 12" wide and out to 35".
Tetrarch DD:  The Duplex Drive is an upgrade that fitted a vehicle with a flotation screen and set of propellers which allowed it to become in essence a make-shift boat.  Once on shore, the flotation screen was lowered and the vehicle could fight and move as normal.  In gaming terms, any "DD" vehicle can move on from a water table edge at 1/4 normal movement and once on shore it takes two actions for the crew to lower the flotation screen.  When erected, the screen obscures the vision of all the crew except for the exposed commander peering over the screen.  The vehicle can still move with the screen up but the commander must use their action to direct the driver in doing so and it also increases the vehicle's Bog Check by +3.  The screen offers no protection to any exposed crew within it from any enemy fire.
Glider-Borne:  The Mk. VII is capable of being transported via the GAL.49 Hamilcar so the Tetrarch can deploy from anywhere a glider can land from.
Soviet Models:  The Availability for Soviet Tetrarch is 5 with only D4 vehicles available.
Wargaming Piece:  I know Gaso.Line does a great 1/48 scale resin kit of the Mk.VII so do a bit of web searching and see where you can pick it up for the cheapest.