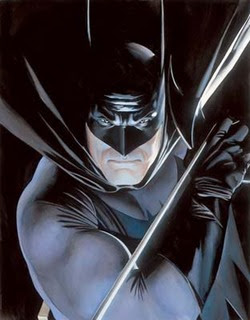 Notes:  No superhero gaming within the war years is complete without the World's Greatest Detective, the Bat-Man.  Here are the rules for this Golden Age heavyweight for your games of BGWWWII.  Be sure to pick up the Battleground WWII core rules set so you can get the most out of these rules.  Watch your ass because the night belongs to the Dark Knight!
Origin:  Bruce Wayne was orphaned as a young boy when a would-be mugger killed his father in a scuffle.  Moments later, his mother suffered a fatal heart attack from the ordeal and died in Bruce's arms.  Upon reaching adulthood and receiving his father's inheritance, Bruce was still haunted by his parent's death.  Because of his loss, he decided to devote his life to the fight against crime so no one else would have to go through what he did as a boy.  Bruce dedicated every second to this cause and would become a superior athlete, inventor and criminal detective.  Bruce soon took on the guise of the Bat-Man to help strike fear into the hearts of Gotham's criminal element.  The police considered the Bat-Man a criminal himself, but once his true intentions were know, Commissioner Gordon realized him to be of great help to the citizens of Gotham City and bestowed upon him the rank of a Special Police Detective.  While on a case, the Bat-Man took on a young boy whose parents were killed by those he was investigating.  Seeing the similarity of his own loss and the boy's, Bruce became the boy's ward.  He agreed to train the boy and was surprised to discover the boy was a natural athlete and would soon join him in his crime fighting.  As war loomed on the horizon, the Bat-Man and several other costumed mystery men were asked by the President to help in fighting against the Axis on the home front.  After the attack on Pearl Harbor, the Bat-Man has continued to fight against Axis spies and saboteurs stateside and occasionally abroad against the armies of fascism.  Today the Dark Knight continues his war on crime and acts as a special agent of the U.S. government against the Axis armies and its agents across the globe.
Name:  Bruce Wayne
Rank/Title:  CEO, Special Field Operative & GCPD Special Detective
Nationality:  United States of America
Affiliations:  Wayne Enterprises, GCPD, U.S. Government, All Star Squadron, Justice Battalion & Justice Society of America
Base of Operations:  United States of America
Height:  6' 2"
Weight:  210 lbs
Eyes:  Blue
Hair:  Black
Actions:  The Bat-Man has 3 actions per turn.
Senses:  The Bat-Man has honed his senses to near super-human levels and with the advanced equipment and hardware at his disposal he will receive a -1 to any sensory-based test.
Strength & Toughness:  The Bat-Man possesses the normal human strength and toughness of a man of his age and size who engages in extensive physical training.
Movement:  Due to his peak physical condition, the Bat-Man may move up to 7", crawl 4" and leap up to 4" per action.  He may also go from a prone to a standing position for free.  The Bat-Man is also an expert swimmer and can swim at double the normal rate and hold his breath for D10+4 actions.
Training:  The Bat-Man has extensive training in numerous martial arts from various sources and is also of genus-level intelligence in all known scientific fields.  The Bat-Man will roll 3 dice when in close combat picking the single best for his final score.  Due to his extensive schooling and training, the Bat-Man will never suffer from the Unqualified, Captured Use or Crew Served rules unless the item is of a more advanced design for the time or is alien or supernatural in nature in which he will have to make a successful Skill Check and suffer from the normal penalties.  The Bat-Man is an expert operator of all known aircraft, boats and vehicles of the day.
Morale:  The Dark Knight is considered a 19-3 Legendary Leader thus ignoring all Man Alone, Breaking Points, Enemy Vehicle, Gut Checks and all Suppression results unless within a blast.  He can never become a hero or coward and has a Command Range of 18" to normal individuals but will have a 20" to any member within the GCPD, ASS or JSA.
Weapons & Equipment:  The Bat-Man has access to any and all weapons within the Allies combined arsenals as well as advanced items of his own design.  The Bat-Man usually carries a Colt 1911 pistol and various items within his utility belt which includes but is not limited to, custom Bathooks with wire, Baterangs, frag and smoke grenades, IR imager/spotlight, camera equipment, evidence collection items, lock picks and other gadgets that assist him in his crime fighting.  The Bat-Man may be fitted with just about anything he might desire, so if the controlling Commander has something special in mind they can have rules for it and have their opponent or BM agree to it before the battle.  The Bat-Man also has access to several vehicles of his own design that include the Batmobile, Batplane, Batcycle and an advanced gyro-copter prototype known as the Bat-Gyro.  See appropriate vehicle cards for characteristics and special rules.

Baterang:  The Baterang is a throwing weapon that Bat-Man uses frequently when a firearm is not desired.  There are several types but they all look similar to the Bat-Man’s chest logo and can return to him if desired like a boomerang.  The most common type is a razor sharp bladed weapon used to disarm or disable an opponent but fragmentation and knock out gas grenade models are available.  Bat-Man may throw a Baterang of any type up to 12” with a successful Skill Check.  If he wishes the Baterang to return, it may only travel a maximum of 12” at a ½ Skill Check.  Grenade Baterangs will act as their normal grenade counterpart but the bladed type will cause a single C column hit.  If the Baterang is meant to return to the Bat-Man then it will only cause a single D column hit.  The Bat-Man can carry up to 6 Baterangs of any type during any given battle.
Bathook Movement:  The Bat-Man has trained extensively with his own grapnel hook device called the Bathook that allows him to ascend and descend with great speed.  To do this, Bat-Man must pass a Skill Check to move up to D12+10" just as long as you can explain the actual means of his movement to the opposing Commander or BM.  For example, Bat-Man wants to cross to another building via the roof so he declares, "I am going to fire my Bathook at that light pole and swing across the gap to the other side." Bat-Man then rolls a Skill Check and range.  If passed, it will take a full action to perform the move and if failed then the action is lost due to a miscalculation or the Bathook failed to properly affix to its target.  I addition, if the Skill Check is failed then the Bat-Man will lose the Bathook if he doesn't spend an action in reeling it back in.  The Bathook can be used as a weapon as well so treat it as having a ROF of 1 with effects of a Pistol +2.  The range is as noted above.

Sidekick:  The Bat-Man is often accompanied by his young ward Robin in his stateside exploits but will never take his young partner abroad with him.  The Bat-Man is very protective of his partner and if he sees that Robin is in great peril, he will immediately rush to his aid.  If Robin is killed, the Bat-Man will fight under the Fanatic rules and will give No Quarter to any and all enemies on the battlefield.

Frightening Appearance:  The Bat-Man's appearance is such that any individual within 5" of him that hasn't seen him until then must make an immediate ½ Morale Check to keep from fleeing in horror.  If surprised by the Dark Knight, any individual in close combat will suffer an additional +2 to their final score.  Friends and comrades of Bat-Man are immune to this rule.
Wargaming Piece:  Heroclix makes all sorts of Batman minis so just peruse their catalog and see which one you would like to use.
Posted by Weird WWII at 12:00 AM