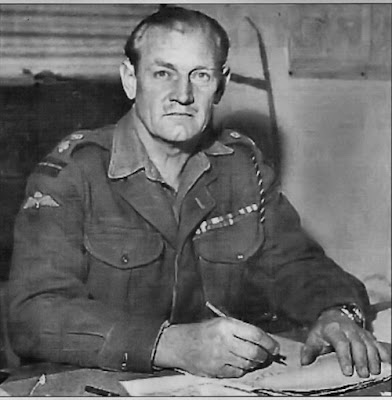 John Malcolm Thorpe Fleming Churchill was an eccentric, hard charging, British bad ass during WWII.  Commissioned after the invasion of Poland, Mad Jack was credited with the only confirmed German kill with an English longbow that he brought with him into battle along with his claymore and bagpipes.  Lt. Col. Churchill commanded several successful commando units in Norway and in Italy whose exploits are as eccentric as its commanding officer.  Mad Jack was later captured after a failed operation in Yugoslavia where he was then sent to a POW camp where he escaped shortly after. (Of course.)  He was however recaptured and sent to an SS-guarded camp but just as crazy ass shit follows this guy, a Heer unit took command because of their belief that the SS where going to execute the POWs and would later release the prisoners including Mad Jack.  Jack then humped it about a 100 miles to a Italian town where he was rescued by the Americans. (Hehe, I'm sure he hated that!)  Once the Germans were smashed in Europe, he got transferred to the PTO in Burma but before he could skewer some Japs with his claymore the war ended.  He was quoted as saying, "If it wasn't for those damn Yanks, we could have kept the war going another 10 years.

Now that is my kinda Brit,
Brian 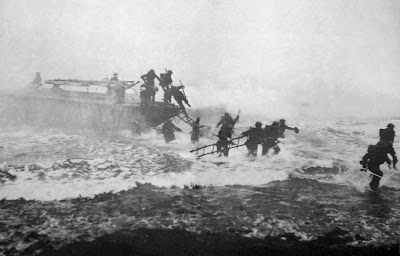 Mad Jack wielding his famous claymore into the fray!

Notes:  Below are the rules we use for Mad Jack in our games of BGWWWII.
Morale:  Mad Jack is Elite and has a Morale of 17-3.
Scottish Claymore:  Jack wielded a Scottish claymore and will receive an additional -2 when in close combat.
English Longbow:  Jack can spend an action to fight with his longbow.  The range of the longbow is 24" with a ROF of 1 and will have the same effect as a rifle.  Note that the bow makes no sound when used so apply that to any Sighting Checks made against Jack when using it.
Scottish Bagpipes:  Jack can spend an action playing his Scottish bagpipes to help drive his command on.  Any Commonwealth forces within earshot (24") of Jack's pipes can use his Morale for any Morale-based checks.
Deployment:  Jack seemed to be everywhere and fighting everyone so he can be deployed on any damn front you want so have at it.
Wargaming Piece:  Mad Jack would make for a pretty easy conversion so if you end up doing one let us take a gander.
Posted by Weird WWII at 7:54 PM