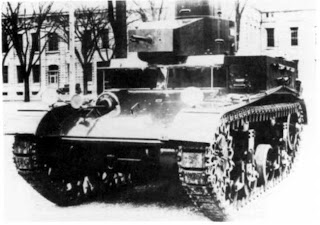 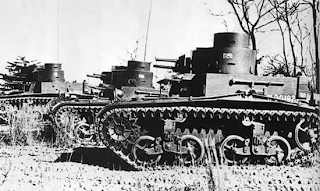 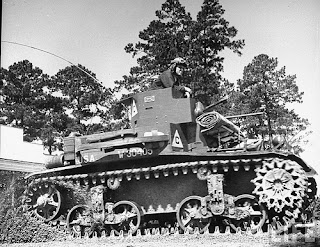 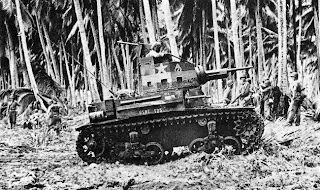 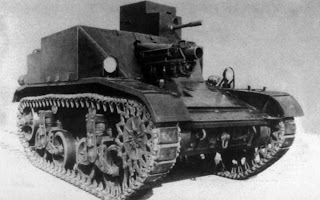 Notes:  The M2 was another tank already obsolete at the wars start but the M2A4 model saw actual fighting in the Pacific as the US rushed everything it could to help stem the Jap's advance.
Date Introduced:  M2A1 (Late '35), M2A2/M2A2E3 (Late '36), M2A3/M2A3E3 (Mid '38) M2A4 (Mid '40) & T3 (Late '40)
Users:  United States, Burma (diesel M2A2E3s only) & Commonwealth Allies (as training vehicles only).
Vehicle Chart:  We use the M3's vehicle chart for the M2 and just modify where needed.  You can find a M3 chart in the Tanker's Challenge supplement.
Crew:  4 (commander, gunner, driver & asst. driver)  *The T3 has a crew of 4 with the asst. driver/radio op. acting as the weapon loader and the vehicle's radio is operated by the commander.
MG As Main Gun:  The M1A1, M1A2 and M1A3 models will not suffer the No Commander penalty for firing the tanks machine guns.
Mae West Dual Turrets:  The M1A2 and M1A3 both have dual side by side turrets with 270-degree independent rotation for each one.  The left side turret is armed with a .50cal machine gun and is fired by the commander.  The right side turret is armed with a .30cal machine gun and is fired by the gunner.
M2A4 Commander As Gunner:  Due to the commander being the gunner for the main gun, all shots will  suffer from the No Commander penalty.
M2A4 Fixed Side Machine Guns:  The M2A4 has two fixed .30cal machine guns on either side of its hull.  These weapons fire forward of the vehicle in hopes of suppressing any enemy troops ahead.  The driver may use an action to fire the machine guns which will hit any targets in a 45-degree field of fire to the weapon's immediate front.  Note that it is assumed that any targets prone or lower then the level of the machine guns are immune to actual damage but they will be forced to stay prone or be hit.  If the weapon jams, it is the asst. driver/radio op.'s job to clear them and not that of the driver.  The driver may drive and fire the machine guns within the same action with a half To Hit.
Diesel Engine:  The M2A2 and M2A3 both had numerous vehicles fitted with a diesel engine (models M2A2E3 & M2A3E3 respectively) that benefits the vehicle with a +1 to any effects on the Penetration Effects chart.  Availability for a diesel engine in these two models is a 10.
Unarmored Ammo Racks:  Because of the lack of armored ammo racks, all M2A4s and T3s will suffer an additional -1 to any result on the Penetration Effects chart.
High Ground Pressure:  All M2 models and the T3 will suffer a +1 to all Bog Checks due to its high ground pressure.

Pistol Ports:  M2 models had various turrets over its production and some were fitted with pistol ports.  These ports allowed for the crew to fire their side arms from within the vehicle usually at assaulting enemy infantry.  The commander and loader may fire their pistol or sub machine gun out of a pistol port by using an action in doing so.  All pistol ports have a 90-degree fire arc and will always suffer a half To Hit penalty.  Note that prone infantry 1" away from the vehicle cannot be hit by fire from these ports and infantry within 2" will receive partial tank cover from fire from the pistol port.  As for what model is fitted with pistol ports, just use the WYSIWYG rules to determine which.
AAMG:  The M2A4 was often fitted with an AAMG mounted to the rear of the turret.  The gunner mans it by standing on the engine deck.  The only cover the gunner is offered would be Partial Tank Cover from fire from the front but no other cover is given to flank or rear incoming fire.  Use all other rules as normal for AAMG fire and Vehicle Shadows sighted from the weapon's location.
Rivet Construction:  All models of the M2 and T3 are of riveted construction and will suffer as such when hit at the appropriate locations.  Any non-penetrating hits to a location with rivets will force any crew that might be at that location to take an immediate D column hit.  Apply any effects as normal with the exception of any MC or Suppression results will be considered -1 action for the the effected crewman for the remainder of the battle.
Burmese M2A2E3:  The Availability for Burmese units fielding the M2A2E3 is 5 for D4 vehicles.
T3 HMC:  The T3 has a 75mm howitzer fitted in the front hull and has a 45-degree field of fire.  The howitzer has a dedicated gunner and loader so the above rules for the vehicle commander performing dual roles is negated.  The commander mans the turret and fires the .50cal fitted within it.  This model is only provided to US units.
75mm Ammunition:  The T3's howitzer is capable of firing HE, HEAT, Smoke (WP & Chem) & a Mustard gas shell.
T3 HMC Indirect Fire:  The T3 HMC may use its 75mm in an indirect fire role with a minimum range of 45" and an unlimited maximum range.
Police Use:  It is possible that early models of the the M2 might have found use with local law enforcement.  If gaming with a large urban police department then the Availability of a M2A1, M2A2 or M2A3 in its inventory will be a 8 for a single vehicle.
State Guard/British Home Guard Use:  The possibility of the outdated M2 to find its way into a State Guard or British Home Guard unit is quite high thus the Availability of D4 vehicles is a 10 for any US M2 model.  British Home Guard Availability is a 3 for a single M2A4 model.
Flame Tank:  Some M2s were fitted with a simple man-portable flamethrower that replaced the bow machine gun or one of the machine guns fitted in a turret.  This easy conversion allowed any M2 to become a deadly armored flamethrower.  The flamethrower is operated by the asst. driver/radio op. or turret machine gunner and takes an action to fire within the normal fire arc of the machine gun replace.  The flamethrower has enough fuel for 8 shots and will use the Man-Portable flamethrower template.  The tip of the template will be placed 2" directly in front of the flamethrower's position.  Any prone figures between the template and tank will make an immediate Morale Check and any standing will suffer an automatic Gory Death.  All normal flamethrower rules apply.  In addition, any penetrating hit to the HF 8 location or right HS 10 location or the front and side locations of whichever turret is selected to hold the flamethrower, will result in an automatic Catastrophic result on the Penetration Effects chart.  Availability is a 5 to any State Guard units and a 1 for any police departments.
Wargaming Piece:  I don't know of anyone who does a 1/48 or 1/50 scale model or toy of any of the M2s so let me know if you do so I can post it up here for other gamers to know.