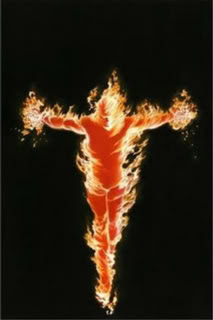 Origin:  In 1939, scientist Prof. Phineas T. Horton created an advanced android that had the appearance and intelligence of that of a human being.  Excited to show the world his newest creation, Prof. Horton held a press conference to unveil his creation but as he lifted the glass tube, he gasped in horror as his creation burst into flames.  The press was terrified and reported that the professor had created a monster.  Once the authorities learned of this, they deemed the android too dangerous and told the professor to disassemble it or they would.  Feeling sorry for his creation, Horton decided to encase it in a block of concrete so no one would know that it was not disassembled.  Horton told the authorities that he did as they instructed, and the android was soon forgotten.  Over time, a crack in the concrete allowed enough oxygen in to ignite the android and the concrete soon melted away.  Confused, the android began to search for its creator inadvertently causing numerous fires and chaos in the city.  Soon realizing its actions could harm others; the android extinguished itself in a large pool of water.  Once extinguished, the android learned to control its flaming body at will.  It was later reunited with its creator only to realize that Horton wanted to use it to get rich.  The android decided that it would no longer be controlled by others but make its own way.  It chose the name of Jim Hammond and transformed into his fiery alter ego to fight crime and other costumed criminals.  It was during this time that Namor attacked the surface world on behest of Atlantis.  Namor was confronted by the android in which it and a human woman convinced him the errors of his ways and Atlantis' avenging son returned to his underwater world.  The android later became guardian to a young, orphaned teen who had similar powers and the two became partners against crime under the names of the Human Torch and Toro.  When World War II broke out, the flaming duo would fight the forces of fascism and oppression and within the Allies' superhero team the All-Winners Squad.  It was during this time that the Human Torch began to lean to be more human by protecting mankind from itself.

Name:  Jim Hammond
Rank/Title:  Special Field Operative
Nationality:  United States of America
Affiliations:  U.S. Government & the All-Winners Squad
Base of Operations:  United States of America
Height:  6’ 3”
Weight:  300 lbs.
Eyes:  Blue
Hair:  Blond
Actions:  The Human Torch has two actions per turn as normal.
Senses:  The Human Torch acts like any other human when making any sensory-based tests.
Strength:  The Torch has the average strength of a human man his size that engages in extensive physical activity.
Toughness:  Due to his android make-up, the Human Torch is immune to all heat and flame damage in any form he may be in at the time.  Hammond’s body is also constructed more robustly than a human’s and will ignore his first Heavy Wound.  His artificial body allows him to take more punishment than a normal human without shutting down due to shock, so he will never suffer the +5 modifier while being Light Wounded.  However, once damaged he will lose a single action like normal.
Movement:  The Torch can fly up to 18”, move up to 6” and crawl up to 4” per action.  The Torch may swim as normal but cannot be in his flame form when doing so.  Since Hammond is an android, he does not need to breath so he has no need to hold his breath.
Training:  The Human Torch is proficient in all Allied firearms and explosives and will not suffer from the Non-Qualified or Captured Use rules unless the item is more advanced for the time or is alien or supernatural in nature.  Hammond is also an accomplished pilot of all know aircraft, watercraft, and vehicles of the time.
Leadership:  The Human Torch is considered an 18-0 Elite Hero.  The Human Torch does not have the inherent fears that a normal human would which allows him to ignore any Gut Checks he might normally have to take and is immune to the Man Alone, Enemy Vehicle and Breaking Point rules.  Hammond is also immune to any Suppression result unless within in a blast.
Weapons & Equipment:  The Human Torch has been trained in all U.S. weapons and explosives but rarely arms himself with them unless it is specifically needed for the mission at hand.
Combustible Body:  The Human Torch's body is covered with photoelectric solar cells that serve as his power source.  These cells also allow him to transform into a gaseous plasma flame that can cover any or all his body at will.  He is capable of heating himself up to 1,000,000 degrees Fahrenheit but usually maintains his temperature around 780 degrees when in flame form.  This trait also allows him to fly.  The Torch cannot be forcibly smothered out unless he is completely submerged in water or if hit with anti-flame agents on a D20 score of 10+.  When alight, all projectiles will pass through his gaseous form without any damage but if any part of his body is solid then he will take damage as normal.  The Torch can automatically set fire to anything that might be combustible if in base-to-base contact with it.  If any surface is flame-resistant, like steel or concrete, then he can burn it on a successful ½ Skill Check.  This can also be done in close combat with vehicles or bunkers in which the Torch melts a hole in the armor then projects a blast of flame into the hole.  Anyone within the enclosed space will be hit with an A column hit with a -5 to the result in addition to suffering from the normal penetration roll result.  Anyone within 2" of the Torch when alight, will suffer from an automatic hit that will be determined by rolling a D4.  A score of 1 will be an A, 2 a B, 3 a C and 4 a D column hit.  The only exception to this is if at the beginning of the turn the Torch declares that he has lowered his temperature to a safe degree so others may stand near him without taking damage.  Use the appropriate marker to indicate if Torch is approachable.
Pyrokinesis:  The Human Torch can control fire by telekinetic means.  This ability allows him to create jets of flames and fireballs from his flaming body used as offensive weapons.  When using this ability, the Torch can use both the Infantry-Based and Vehicle-Mounted Flamethrower templates by expending an action in focusing his flame burst in the direction desired.  All normal flamethrower results apply.  The Torch is also able to throw balls of flame like someone would throw a snowball; this is done by using an action to mold several then throwing them at his target.  He may create D4 fireballs per action.  These fireballs may be thrown within rifle range with a C column hit on a successful Skill Check.  He may also use his flame attacks as a penetrating attack against armored targets.  All fireballs will have an AP of 3 and the flamethrower has an AP of 12.  In addition to the normal damage these flame attacks will catch fire as stated within the flamethrower rules.  Due to the sheer heat and lack of solid form, the Human Torch cannot lose in close combat unless he is in solid form or is attacked with anti-flame agents or weapons that smother his flame in which he will fight like normal.  Remember, anyone within 2" of the Torch when alight will be auto hit so any close combat attackers must be fitted with heat resistant clothing or shielding to even engage him in close combat.  His pyrokinesis also allows him to control any other fires that may be alight within 25" with a successful Skill Check.  If passed he can use an action to manipulate the flames in any way, he sees fit but cannot intensify the fire unless he uses flames from himself or other sources to do so.

Night Spotting:  The Human Torch's glow is mostly within the Infrared spectrum and gives off the same amount of light, as that of a large, covered flashlight.  Treat the Human Torch as a covered flashlight when trying to spot at night.  Because most of his glow is within the Infrared spectrum, anyone equipped with Infrared spotting equipment will automatically spot him if within LOS of their equipment.
Nova Burst:  The Human Torch can expend all the stored energy within his solar cells to create a single extremely intense blast of heat called a Nova Burst.  The temperature of this Nova Burst is above 1,000,000 degrees and causes devastating damage and destruction to anyone or anything within its blast.  This is also very exhausting and once done, the Torch will revert to his solid state and collapse from exhaustion.  To perform this attack, the Torch will expend 2 actions to flare up then explode.  The blast will have a 5D20" radius and anything touched by the blast will be destroyed and everything within the radius of the blast will be set on fire for the remainder of the battle.  The only way to survive this blast is if in some type of shelter designed for such attacks, by supernatural means or equipped with some type of equipment that would protect them from a 1,000,000-degree blast.  Once the Nova Burst has occurred, the Human Torch will revert to his solid state and be unconscious for the remainder of the battle as his body recuperates from the ordeal.
Posted by Weird WWII at 2:18 PM