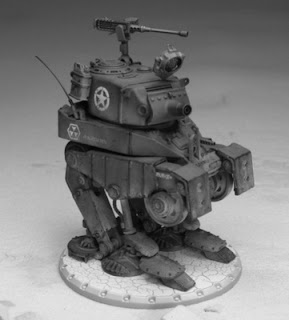 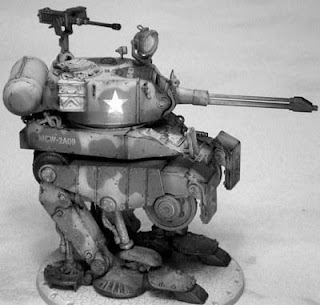 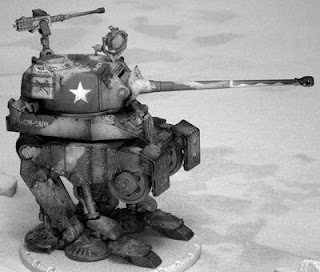 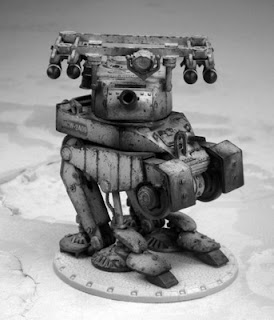 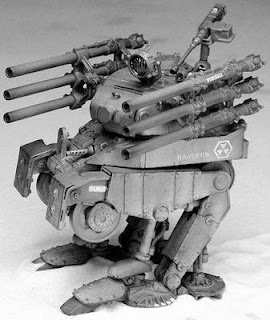 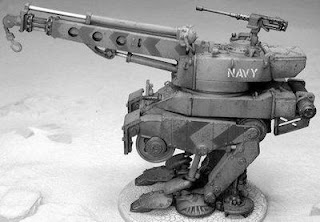 Notes:  The Hood is the Commonwealth version of the US's M100 Medium AMW procured via the Lend Lease program.  The Hood is named after the famous Confederate Civil War general John Bell Hood in the similar fashion of other US equipment used by Commonwealth forces.
Date Introduced:  Hood I (Mid '44). Hood II (Mid '44), Hood III (Mid '44), Hood IV (Late '44), Hood V (Mid '50) & Hood ARV (Early '45).
Users:  The Hood saw service with all Commonwealth forces on all fronts during the war.
Vehicle Chart:  I don't have a vehicle chart for the Hood so you'll have to wing it for yourself.  If you do end up making one be sure to let me take a look at it so we can let the rest of the BGWWWII players give it a go.
Crew:  All models of the Hood except the Hood III and Hood ARV have a crew of 4 (commander/radio op., gunner, loader & driver).  The Hood III and IV have a crew of 3(commander/radio op, gunner or crane operator & driver).
Walker Type:  All Hood variants are considered a W2, Medium walker and will be bound by all the appropriate rules as such.
Remote-Controlled Bow Machine Gun: All Hood variants except for the "Pounder" have a bow machine gun that is controlled by the driver.  The driver is able to manipulate it with a simple bar with a trigger, similar to the remote-controlled machine gun on the German Hetzer.  Note that the driver can only operate the weapon when not moving the walker.  The "Pounder" has forgone the bow machine gun in favor for more ammunition storage for its main gun.
4" Smoke Dischargers:  The Hood has two sets of dual 4" smoke launchers fixed to either side of the turret loaded with smoke rounds.  The commander uses an action to fire the launchers in which both will fire a single smoke round that will then smoke the front 180-degrees of the turret's front.  The launchers can only be reloaded externally and it will take a crewman one action to load a single launcher.  If only one set is loaded and then fired, it will only produce a 90-degree smoke cloud to the front side of whatever launcher was fired.  Availability is 15 for all models of the Hood except the ARV which is not fitted with these mortars at all.

Searchlight:  All Hoods are fitted with an external searchlight that can be manipulated by one of the crew whilst dismounted.  Alternatively, the searchlight can be locked in place and will shine forward of the turret whichever direction it is pointed.  The owning Commander must state if the searchlight is fixed or not at the beginning of the battle.  The searchlight has a 45-dergree cone and will illuminate out to 35".
AAMG:  The vehicle's AAMG is fitted to the rear left side of the turret and can only be fired if the gunner is dismounted and only to the rear and left side of the walker.  This is a piss pore location for the AAMG but tell it to the engineers or Paolo.  WYSIWYG can be a real bitch sometimes, huh?
Unarmored Ammo Racks:  Due to the lack of an armored ammo rack, all Hoods that carry shells for its main gun will suffer an additional -1 to any result on the Penetration Effects chart.
IR Upgradable:  The Hood III is capable of being fitted with the M54 "Blacklight" IR System as described in the IR Rules.  Availability is an 10 in the ETO and MTO and a 5 in any other theater.
Indirect Fire:  The Hood I may use indirect fire with its 75mm howitzer.  The weapons has a minimum range of 45" and an unlimited maximum range.  The 75mm howitzer is also capable of firing a "Willy Pete" shell but these were not always supplied in large numbers to Commonwealth forces.  Availability for WP is 16 with D10 shells.
Petard Mortar:  The Steel Rain Hood model is primarily used as an engineering vehicle in that its mission is to neutralize enemy fortified positions and structures.  Accompanying units suppress the enemy so that the walker could put its ordnance on the fortified position and obliterate it.  The Petard Mortar was a unique weapon in that it basically fired a large demolition charge at its target.  Because of the nature of the weapon it has a slow Load time of 2.  This weapon was also able to fire smoke under the normal rules with a large HE template.
RP-3 Rocket Rack:  A rack with four RP-3 rockets is also fitted to the roof of the Hood IV.  These rockets may be fired one at a time or in a salvo by the vehicle commander.  It will take a single action to fire them either way.  Once all four have been fired, the vehicle will be unable to reload in the field.  The RP-3 rocket will have an unlimited range and will only hit on a 5 or less.  Note that the rocket produces a back blast so use the normal rules as such.  If a miss is rolled then scatter the impact point as normal.  The RP-3 is capable of having a AP, HE or HEAT warhead.  The owning Commander must declare what kind of warhead is fitted before the battle begins.  The characteristics of each warhead is noted below.
Warhead Type     AP     HE Size
Armor Piercing      40        -----
High Explosive      27        Large
HEAT                   34        Small
Hood II:  The Hood II is fitted with a vehicle-mounted flamethrower in the turret.  This flamethrower has enough fuel for 14 shots and will use the Vehicle Flamethrower template.  Any penetrating hits to the turrets rear or side locations that cover the flamethrower's fuel tank will cause an automatic Catastrophic result on the Penetration Effects chart.  The weapon takes an action to fire by the walker's gunner.  The co-aux machine gun is still present so it can be used as well but not in the same action as firing the flamethrower as normal.
Hood V:  The Hood V is fitted with two sets of three M40 recoilless rifles.  Only a single M40 can be fired at any given time with the gunner using an action in doing so.  The gunner will be at a +2 to hit as the sights for this set up was very awkward.  Once all the weapons have been fired, the weapons can be reloaded by the crew but it will take two actions per weapon to do so.  The loader must dismount and can only carry two shells at a time unless another crewman is assisting in which they can relay ammunition without any limitation.  The M40 could also fire the M581 shell that peppers the targets with metal flechettes.  Place the M40 Flechettes template directly 6" in front of the firing barrel.  Any target that lays with the 6" path will be as if hit within an A column.  Roll for effects for anything under the template as normal.  The M581 Availability is 5 with D10 rounds available.
Hood ARV:  This ARV has a 20-ton crane placed in its turret and is bound by the normal rules as such.  Note that the walker must spend two actions Bracing itself before it lifts anything.
Wargaming Piece:  You can pick up all the Hood variants from Dust Studios or FFG under the Dust Tactics or Dust Warfare game titles.