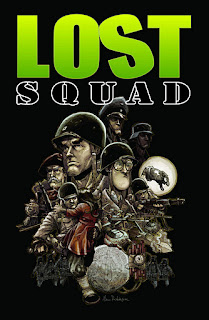 A squad of hard nosed GIs and a mysterious Brit take on super-science and supernatural threats to save the whole world from the Nazis' dark dreams of world domination.  Now this is a fantastic WWWII comic!  Chris Kirby has truly grasped the feel of what WWWII is and has made a fantastic story within in.  He adds just enough weird to the WWII to make a seamless tale where you think Nazi sorcerers could have actually commanded those panzers and that the dog-eyed Joes in those foxholes may have actually seen a Nazi spider tank in the distant fog.  The dialog is smart and the action is reminiscent of the cliffhangers of days gone by.  Its COMBAT! meets Kolchak.  Alan Robinson's art reminds me of a mix of Bruce Timm and Kevin Maguire and really brings the story to life with some great WWWII designs.  I also hear that this is planned to be an upcoming feature film so read it and be one of the cool kids who loved it before it went mainstream.