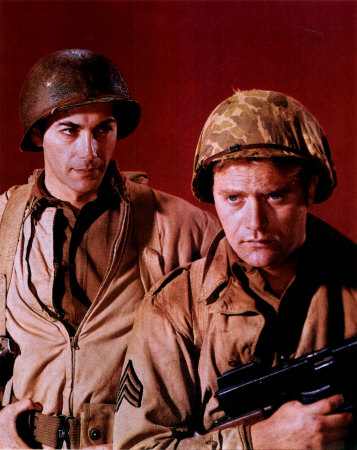 Combat follows a squad of US GIs through their fighting in France during WWII.  Combat ran on ABC from '62-'67 and had a ton of guest actors and directors that would later become huge stars like James Caan, Lee Marvin, James Coburn, Robert Duvall, Richard Donner and many more.  This show depicted the ground pounder in a realistic light and was reminiscent of the classic war comics of the day.  This is a great show and is a fantastic inspiration for your gaming as each episode in itself is a gaming scenario to play out on the tabletop.  Rick Jason is the hard but fair officer and Vic Marrow is the classic stoic American NCO with the rest of the regular squaddies hitting  the gambit of WWII characters seen so many times before and after.  A 40-disk DVD set was released a while back and is jammed full of extra stuff and is a must for any fan.  Here is a awesome Combat fan site full of great trivia from the show.

Move out!
Brian
Posted by Weird WWII at 3:36 PM