"Blunting The Tip Of The Spear" 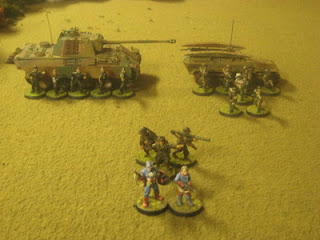 We played a game in which the forward elements of a panzer unit where probing the front but what they didn't know is that Cap was ready and waiting.  The good guys were tasked with capturing at least one German for interrogation back at HQ.  The patrol consisted of Cap and Bucky along with a US para bazooka section.  The Germans were to either identify all Allied units on the table or exterminate them all.  The Germans were fielding a Panther G along with a squad of panzergrenadiers in a 251. 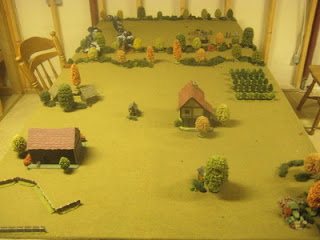 Pre-battle table.  The battle opens on an overcast morning with the Germans entering the board and discovering their scout section, that was sent ahead of them, has been ambushed.  The two vehicles are ablaze in the middle of the road ahead and... 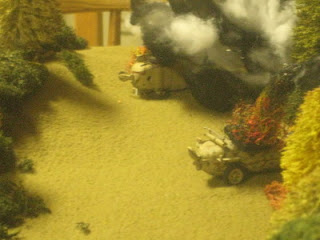 The Germans turn a bend and discover their scout section ambushed up ahead.  The Panther pulls over and the 251 takes the lead. 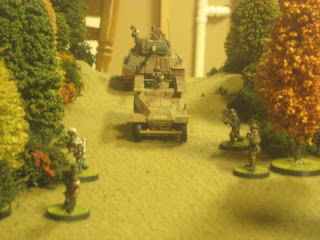 The panzergrenadiers dismount and slowly approach the carnage, looking for a possible ambush.  The LMG section on the Panther's deck dismount and move to set up overwatch. 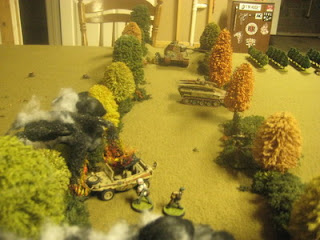 The Sgt and medic reach the burning vehicles to discover that the men are all dead.  Then suddenly, small arms fire coming from the barn to the flank and the 251 is peppered with small arms fire.  Then 251 moves and returns fire, lighting up the barn with machine gun fire. 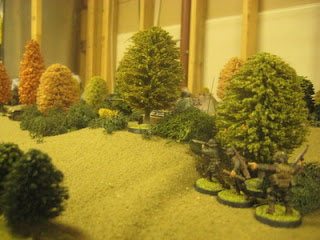 The para bazooka team moves slowly along the bocage to get a shot at the Panther's rear. Bucky withdraws just as the Panther lets loose a 75mm shell that destroys the front of the barn. 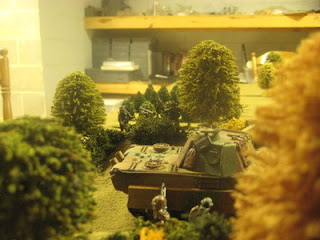 The bazooka teams moves to fire but are discovered by the screening panzergrenadiers.  The MG42 opens up and shreds the bocage in front of the GIs. 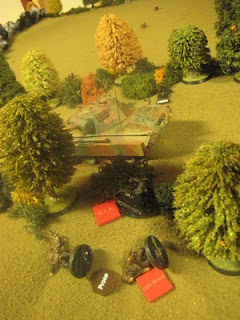 The machine gun rips the bazooka team apart, killing the gunner, wounding the loader and forcing the Sarge to hit the deck. 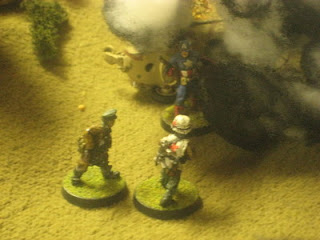 "Morning!"  The German Sarge and medic turn around to see the red, white and blue emerge from the smoke.  With a smile Cap levels his Thompson and commands the men to surrender.  The men look at each other and they raise the MP40s but before they can get off a shot, Caps shield smashes into both sending them to the ground unconscious. 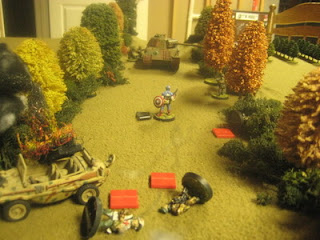 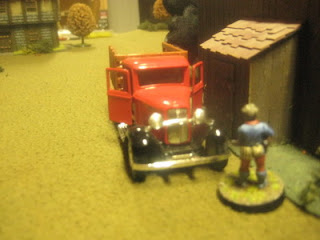 Bucky rounds the barn to see that the 251 has seen the bazooka team and is turning to engage them.  The crossfire will surely rip them apart if he doesn't stop them.  Bucky see the farmer's truck and has an idea. 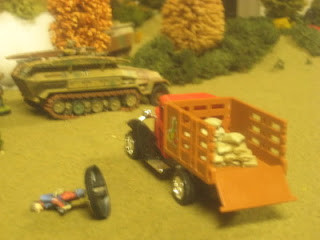 Bucky uses some of the skills he was taught back at Camp Le High and hotwires the truck.  Bucky puts the peddle to the metal and races towards the 251.  Bucky then ties the steering wheel with his belt and pulls the fuse of his demo pack and leaps from the moving truck.  The 251 opens up on the bazooka team, killing the loader but not seeing that their end is near. 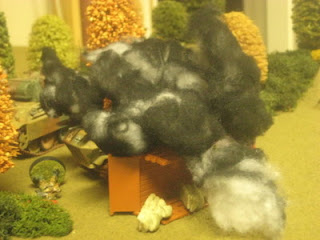 The truck crashes into the halftrack and then the demo charge cooks off, destroying both vehicles in a huge fireball. 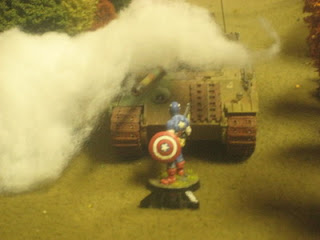 The Panther crew witnesses the destruction of the 251 and then the driver calls out that Cap is headed their way.  The bow machine gunner opens up as the turret rotates to take on the new threat.  The lead from the German MG smashes into Cap's shield like rain on a windshield.  Cap throws a Willy Pete and the scene is engulfed in a cloud of thick white smoke.  The bow and co-aux machine guns fire blind into the white smoke hoping for the best as the commander buttons up his hatch. 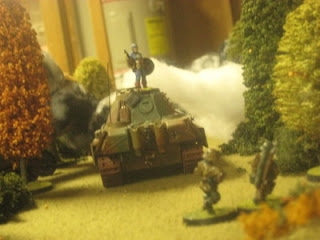 Luckily, the tank commander closes his hatch just as the Sentinel of Liberty lands on top of the turret.  The Germans who shot up the bazooka team see Cap emerge from the white cloud and opens up with their MG42.  The bullets ricochet off the Panther as well as Cap's shield. 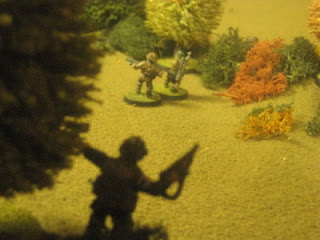 Seeing that Cap's diversion worked, the para Sage pulls himself off the deck and opens up in the Germans who killed his comrades. 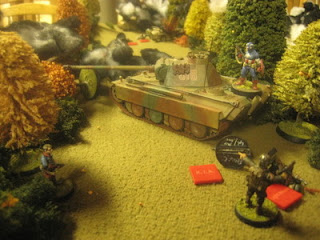 The Sarge's fire kills the gunner and wounds the loader.  Suddenly, the Panther jerks to a stop and starts to pivot to engage the Americans.  Bucky arrives just as the Panther opens up with its co-aux mg, just missing him.  The Sarge races down and grabes the wounded German as Cap unslings his satchel charge and places it on the Panther's engine deck. 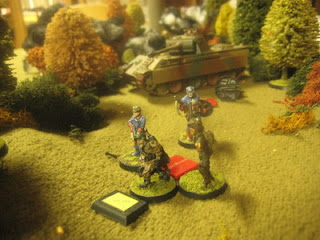 The Americans and German captive all race to the bocage as the Panther gets closer to its kill shot. 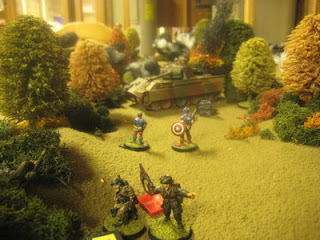 But before the Panther can level his 75mm, Cap's charge explodes!  The engine is destroyed and caused a stream of flame to rip through the crew compartment.  Cap and Bucky race over to the crippled cat to see if they can get some more prisoners. 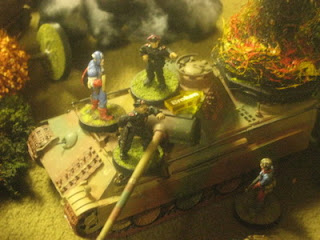 Two hatches open and black smokes bellows out along with two crewmen.  Cap leaps on the panzer's deck with Thompson raised and the two men surrender without incident.  The rest of the crew will never leave their tank again. 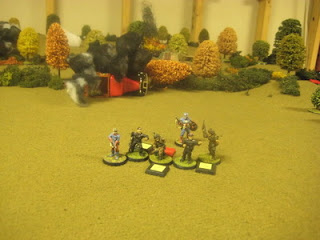 The Panther's ammunition cooks off as our heroes escort their prisoners back to the rear for some good 'ol fashion one to one with S2. 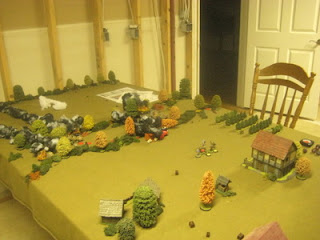 Post-battle table.  Well their ya go a battle right outta Combat! with the addition of Cap of course.  A funny side note to this game was that I was playing against my nephew and I asked him if he would rather take Cap or a tank and without a pause he wanted the armor.  With a smile, I think I taught him a lesson that tanks are pretty fragile without that infantry supporting it.  Oh yeah and playing Cap didn't hurt either.