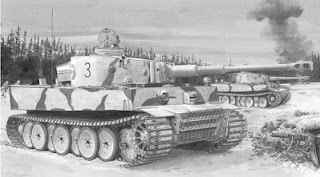 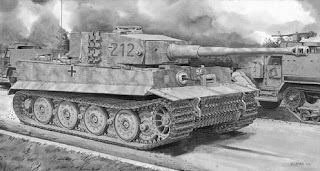 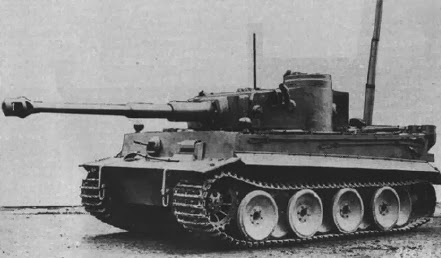 Pzgr.40/43 Round:  The rare Pzgr.40/43 is a high velocity, sub-caliber, tungsten core round issued in limited numbers to units that were expected to face the heaviest of Russian tanks like the IS3.  Although the penetration is more powerful than the standard AP round, it was not fitted with an explosive filler charge so it did not cause as much damage once it penetrated the enemy's armor.  Because of this characteristic, this round will suffer from a +1 penalty to the Vehicle Penetration chart if the round penetrates its target.  This round has an Availability of 5 with D4 rounds available per vehicle.
Panzerbefehlswagen:   The command version of the Tiger had its co-aux machine gun, loader's side turret vision block and the turret periscope uninstalled as well as its main gun ammunition reduced to allow for the extra radio equipment.  This version also saw the addition of an antenna in the turret and a "Star" antenna on the rear engine deck but otherwise looks and fights as a normal production model.
Wargaming Piece:  There are several companies that make 1/48 and 1/50 scale models or toys of the Tiger in its various stages so just use some Google-Fu and see what you find.