"Nazis vs. the King"

A while back, my wife decided she wanted to do something very, very weird so she looked at all my stuff and grabbed all the heavy armor she could and then ran into our son's room and brought back the King himself.  BAM!  Instant Weird WWII baby!  But of course, I got to be the Germans and she got to kick the hell outta me but keeping Momma happy is my job. ;)  So check out the madness below. 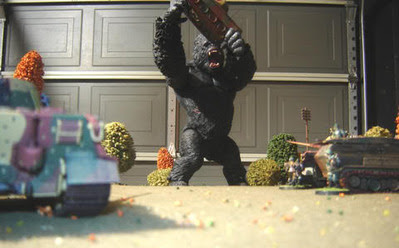 Our story begins with a SS armored column moving through the cold and windy roads of the Ardennes.  The forward vehicle halts and reports that their is possible enemy contact moving through the woods.  The tanks stop and level their guns and the panzergrenadiers dismount and take up positions.  The sounds of snapping trees becoming deafening and a shadowy form approaches the column.  Then an inhuman roar bellows forth and with lightning speed the shadow moves and then lifts up one of the Panther tanks into the air.  A grenadier fires a flare and the column see before them a vision directly from their worst nightmare! 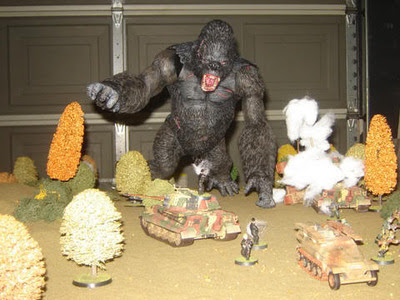 Kong smashes the Panther on top of a King Tiger and they explode!  With the burning panzers lighting up the area, the remainder of the Germans fire at the monster in front of them.  The small arms and machine guns are useless against the monster and the last remaining King Tiger's crew freaks out as the beast start to approach.  Not wanting to become a throw toy like their comrades, they bail out and run for the woods. 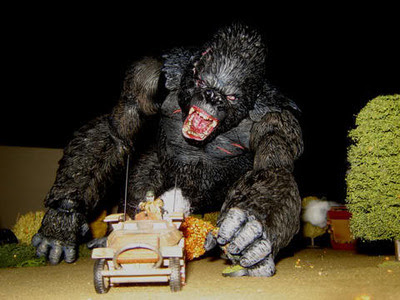 As the rest of the grenadiers and tankers run for the woods, a lone 251 opens up on Kong.  Kong sees the vehicle and heads off to take care of it but picks up an unlucky grenadier and... 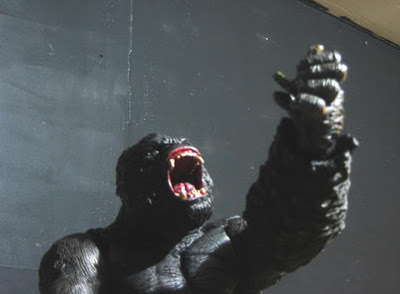 ... has a small snack.  AHHHH!  CHOMP!  The grenadiers in the 251 see their comrade's gruesome fate and the driver puts the medal to the floor and the 251 races away. 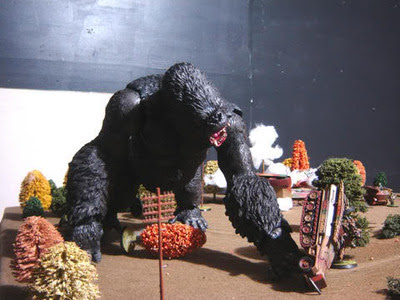 Kong easily catches up to the vehicle and then swipes the 251 outta the way as if it were a toy.  The 251 flys into the woods and explodes and then...  Well, my son walks into the room and sees Mom and Dad playing with his toys and says, "Hay that's mine!"  I guess my wife grabbed it while he was in the middle of some sort of game he was playing.  So being the understanding 3 year old he is, he walked over and took his Kong back and there ya go; game over.  Another classic WWWII game although cut short by an even larger monster then Kong called Jason.  Now his destructive activities on humanity is another story.

Gotta love those little ones,
Brian
Posted by Weird WWII at 2:47 PM