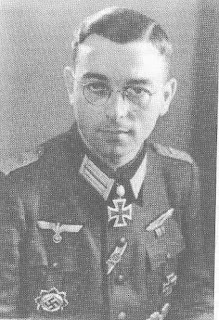 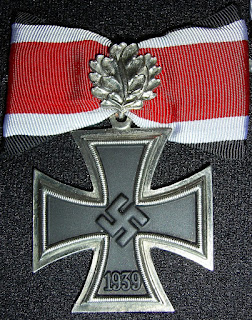 Konrad Zeller
"On the 13.12.1943 the Soviets attacked the so called "Finger position" south of Puschkin, near Leningrad, and were able to capture a portion of it.  Zeller independently led his subordinate 10. Kompanie and the attached 2. Kompanie into a counterattack to fully recapture the lost ground.  With machine-pistol in hand, he succeeded in recapturing most of the lost ground over the course of 3 and a half hours.  The last 150 meters of ground were eventually taken and subsequently lost to a Soviet counterattack.  However the following day Zeller continued the attack and recaptured the position for good."  from his Knight's Cross to the Iron Cross citation, awarded on January 5th, 1944 as Hauptmann der Reserve, Kommandeur I. / Grenadier-Regiment 380 / 215.Infanterie-Division.
"In the defensive battle south of Pskov, on the 31.03.1944, the Soviets captured the town of Krapiwinka and from there threatened the road Pskov—Ostrow.  In response Hauptmann Zeller re-positioned his forces to shield his south flank and launched a counterattack with his reserve Kompanie and 6 Sturmgeschütze from Sturmgeschütz-Brigade 184, and was able to retake Krapiwinka.  Two further breakthroughs at Stremutka and Letowo were also defeated that day, with the result that the main defensive line of the Regiment could be held.  Over the course of a 7 day period the next April Zeller was involved in defeating a total of 55 Soviet attacks, leading 10 counterattacks in the process.  His contributions were a key factor in the German resistance and the consequent holding of the front line."  from his Knight's Cross to the Iron Cross with Oak Leaves citation, awarded on June 9th, 1944 as
Hauptmann der Reserve, Kommandeur III. / Grenadier-Regiment 380 / 215.Infanterie-Division.
Another capable enemy,
Brian
Posted by Weird WWII at 3:52 AM