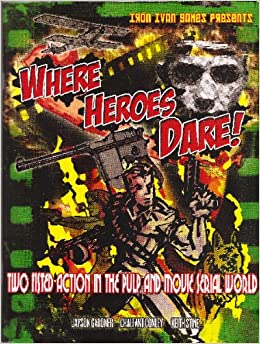 "Have you ever wanted to stop a Nazi doomsday weapon hidden away in a lost Peruvian valley amongst ancient ruins?  Have you ever wanted to show those fools at the university the magnitude of your diabolical genius?  In "Where Heroes Dare!" players field their own custom made heroes and villains along with their companions and lackeys in thrilling adventures set in the 1920s-1930’s pulp fiction and movie serial world.  Players control as little as 3 models or as many as 30 depending on their style of play led by characters with shticks that give them flavor and ability such as hard Boiled or Get a Load of Her! In these pages you will find rules covering Voodoo zombies, gadgets, gear, mad science, giant robots, vehicles, airplanes, artillery, fierce beasts, and a campaign generator that gets you right in the action.  The Perils and Fortunes tables add to the story by giving your characters rewards or penalties from game to game as each chapter unfolds.  Where Heroes Dare! uses the Iron Ivan Games mechanics but adds in a new Dare! ability that allows characters to solve mysteries, perform feats, and duke it out in Dire Duels. Where Heroes Dare! uses a point based system to create your teams and games are finish in about 2 hours. Are you ready for adventure? Then go Where Heroes Dare!"  These are a great set of rules and a must for any pulp adventure fan!
Great stuff!
Brian
Posted by Weird WWII at 11:26 PM