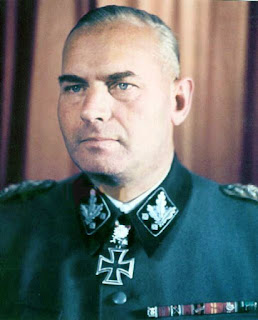 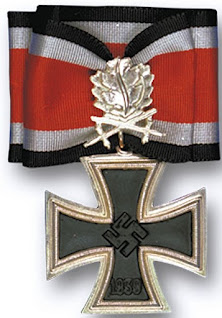 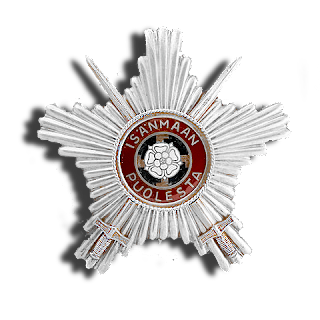 Felix Martin Julius Steiner
"SS-Oberführer Steiner's regiment "Deutschland" was the only infantry regiment of Kampfgruppe Hausser that took part in capturing the island group Seeland from French troops.  SS-Oberführer Steiner's superior leadership was instrumental in the Regiment's swift, three day thrust to Vlissingen and the storming of two powerful defensive positions.  He distinguished himself personally throughout this endeavor and employed his Battalions and Stuka support against heavy enemy fire at the Beveland Canal and the causeway to Walcheren Island.  This swift success had far reaching influence upon the fighting in Belgium, especially at Antwerp, which was now accessible from the Schelde.  SS-Oberführer Steiner also distinguished himself during the fighting in northern France, at La Bassee Canal, at the Lys and the southern front."  from his Knight's Cross to the Iron Cross citation, awarded on 15 August 1940 as SS-Oberführer and commander of SS-Standarte "Deutschland".
"Awarded for his successes on the Eastern front as commander of the SS-Pz.Gren.Div. "Wiking", especially in the fighting along the Terek river.  He particularly distinguished himself through the relief of the 13. Panzer-Division near Gisel, as well as the smashing of a Soviet Guards division that was trying to disrupt the only road into the Korps area near Tschikola (specifically this deed was undertaken by the III./SS-Nordland-Regiment, the so-called Finnish battalion)."  from his Knight's Cross to the Iron Cross with Oak Leaves citation, awarded on 23 December 1942 as SS-Gruppenführer and Generalleutnant of the Waffen-SS and commander of 5. SS-Panzergrenadier-Division "Wiking".
"Awarded for the following command achievements...
1) Overseeing the creation of the Division "Nordland" and the Brigade "Nederland", and their organization under the banner of the III. (germanisches) SS-Panzerkorps.
2) The successful defense by these units against enemy breakout attempts from the Oranienbaum pocket.
3) Keeping his forces intact during the retreat from Leningrad and in their redeployment along the Narva front.
4) The epic defense of his units along the Tannenberg line in July of 1944.  Despite overwhelming enemy force his soldiers held their ground against all the odds, during which heavy enemy casualties (including 1020 tanks claimed destroyed) were inflicted."  from his Knight's Cross to the Iron Cross with Oak Leaves and Swords citation, awarded on 10 August 1944 as SS-Obergruppenführer and general of the Waffen-SS and commanding general of III. germanischen SS-Panzerkorps.
Another capable enemy elite,
Brian
Posted by Weird WWII at 10:24 PM